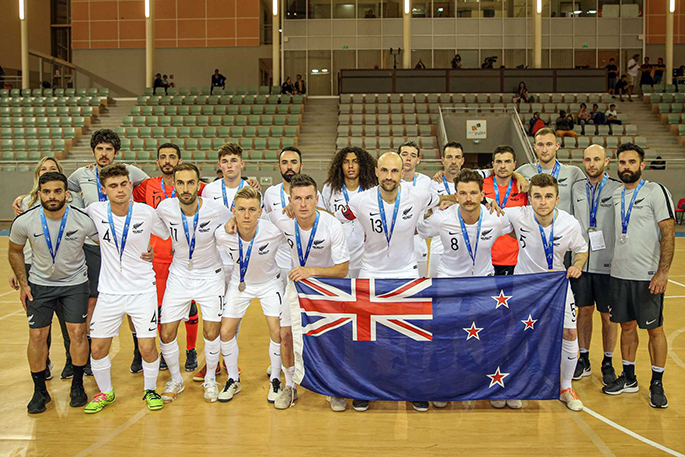 The Futsal Whites with their runners-up medals after the final. Photo: Supplied

The Futsal Whites have come agonisingly close to a ground-breaking place at the World Cup, fighting out a thrilling 10-goal draw with the Solomon Islands before eventually losing on penalties in the OFC Futsal Nations Cup final.

Looking to make history by qualifying for the biggest stage for the first ever time, the Futsal Whites took an early lead with captain Miroslav Malivuk showing brilliant awareness to send a looping shot from deep inside his own half over goalkeeper Anthony Talo.

The New Zealand defence then stood strong in the face of a Solomons onslaught, Elias Billeh producing a pair of crucial saves. That meant the narrow lead was retained at the end of a tense first half but the ‘Kurukuru’ finally found a way through after the restart with James Egeta smashing home.

New Zealand then restored their lead when another sensational strike from Malivuk rocketed into the top-left corner. The defending champions again equalised through Alvin Hou but the Futsal Whites responded immediately when Jordan Ditfort put them back in front.

Desperately searching for another equaliser, the Kurukuru opted to use the power-play with a flying goalkeeper but their plan backfired with Josh Margetts finding the empty net from inside his own half.

The drama didn’t end there, with less than two minutes on the clock, Hou pulled a goal back for the Solomon Islands to set up a grandstand finish. And with just 20 seconds to go, the Solomon Islanders showed their class with Arnold Maeluma netting to send the match into extra time.

Jeffery Bule drove home to put the Kurukuru in front following the restart before Stephen Ashby-Peckham dramatically made it five-all with a composed finish at the other end. Despite some frantic end-to-end action in the final minute, the scores remained deadlocked as the title decider went into a penalty shoot-out.

The Solomon Islands then held their nerve from the spot to qualify for Lithuania 2020 by the slimmest of margins, leaving the Futsal Whites heartbroken but proud of putting in such an outstanding effort.

“It’s been quite a journey over the last couple of years, the guys put in so much hard work, put it out on the court and I couldn’t ask any more from them in that game,” says coach Marvin Eakins.

“It was a great final, when we look back at it maybe we could have done this or that but sometimes it can be out of your hands and we did what we could. I’m glad the Solomons are going, they’re a great team and I know they’ll represent us well at the World Cup.”

There was some glory for New Zealand in the individual honours with Dylan Manickum earning the golden ball as the tournament’s best player while Malivuk shared the golden boot.