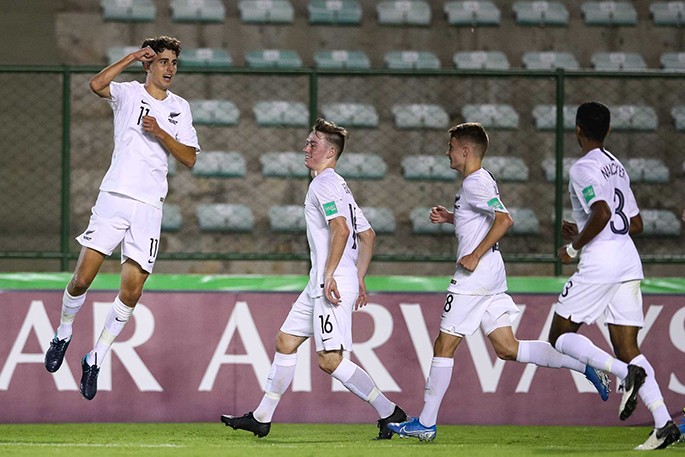 New Zealand have earned just their fourth ever win at a men’s FIFA U-17 World Cup with a nail-biting 1-0 triumph over Canada, thanks largely to a stunning strike from Matthew Garbett and a heroic display by goalkeeper Alex Paulsen.

Both sides were yet to pick up any points after being beaten in their opening two matches in Brazil but could still keep their hopes of progressing to the knockout stages alive with a victory.

It was New Zealand who were able to secure the vital three points but they were made to sweat for their reward by Canada, who enjoyed much of the possession and created numerous opportunities to score but were denied time and again by an inspired Paulsen.

The team captain, who at just 17 is already a member of the New Zealand U-23 squad that qualified for the Olympic Games recently, pulled off several world-class saves in the second half as Canada desperately pressed for an equaliser.

When they eventually did find a way through just before the hour, it looked like the points may be shared but the Video Assistant Referee (VAR) intervened to rule out Jayden Nelson’s effort for an earlier offside.

There was no doubt about the goal that proved the match winner though, which came mid-way through the first half and now gives New Zealand a lifeline in their quest to stay in the tournament.

The impressive Matthew Garbett had scored his country’s only other goal in a 2-1 loss to Angola and was again a major attacking threat at the Estadio Bezerrão in Brasilia. His defining moment arrived when a free kick was laid off to him a long way out and he unleashed a swerving low drive that found the bottom corner for one of the goals of the tournament.

New Zealand had several chances to add to their tally, the best of these going Matthew’s way late on. His effort was saved this time as the Oceania champions were forced to endure a nervy finish but held on for a memorable result.

“Today was all about the boys sticking together, we’ve spoken a lot about a brotherhood and a connection and they showed that in absolute spades in the second half,” says coach Jose Figueira.

“Of course, you want us to have the ball more and try to control the game but sometimes you have to dig deep, roll your sleeves up and fight. I was really proud of the players in that sense.

“Our name is now in the hat and we’ll see how the other results go but at least we get to stay a few extra days in this beautiful country.”

New Zealand have now finished third in Group A and will find out on Monday – NZT - if they will go through to the Round of 16 as one of the four best third-placed teams.