Futsal Whites on verge of history 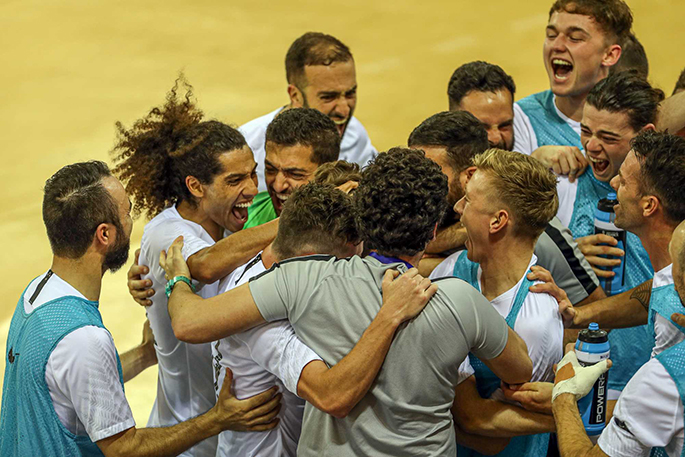 The Futsal Whites are ecstatic after scoring their third goal. Photo: Supplied

The Futsal Whites are just one step away from a place at a first ever World Cup after coming from behind to win a thrilling OFC Futsal Nations Cup semi-final 3-2 against Tahiti in Noumea.

They will now meet defending champions the Solomon Islands in a blockbuster final this evening to decide which nation will represent Oceania at next year’s FIFA Futsal World Cup in Lithuania.

The Futsal Whites earned their chance to make history by producing a stunning second-half come back to edge past Tahiti and keep their maiden World Cup dream alive.

The French Polynesians started with plenty of intensity, racing into a two-goal lead inside the opening five minutes on the back of some clinical counter-attacking. Raiamanu Tetauira opened the scoring with a well-struck drive before Teavarii Kaiha calmly poked home to double his side’s advantage.

But the half-time break proved a game changer for the New Zealanders, who returned to the court a different outfit after the interval. With Dylan Manickum pulling the strings, the Futsal Whites turned the match around with three quick-fire goals during a frantic two-minute period.

Oban Hawkins started the comeback and his strike was swiftly followed by a Stephen Ashby-Peckham equaliser before Oban then grabbed his second and his side’s third against a shell-shocked Tahiti.

The Tahitians did produce a number of opportunities to level the scores in a tense finale but the Futsal Whites held their nerve to hang onto their slim advantage and keep their campaign on track.

“It’s always a great game against Tahiti, they’re real competitors and I’m just grateful we came out on top because it could have gone either way,” says coach Marvin Eakins.

“We expected a tough match, Tahiti brought that and more but we showed what we can do. Even when we went two goals down, we had the ability to come back.

“We’ve put in a lot of hard work behind the scenes leading into this and we had to trust in what we’ve been doing, Tahiti made it hard for us but we had to remind ourselves that we could do it.”

The Solomon Islands earned their place in the final by overcoming hosts New Caledonia in the other semi-final and Marvin is relishing the opportunity to have a crack at the reigning champions.

“The Solomons are a great team and are going to be tough to beat,” says Marvin.

“They had a great preparation, they have a great coach and players with experience at World Cups over and over. We have to rise to that level and show we can beat them playing our style while trying to manage how they play, I’m looking forward to it.”