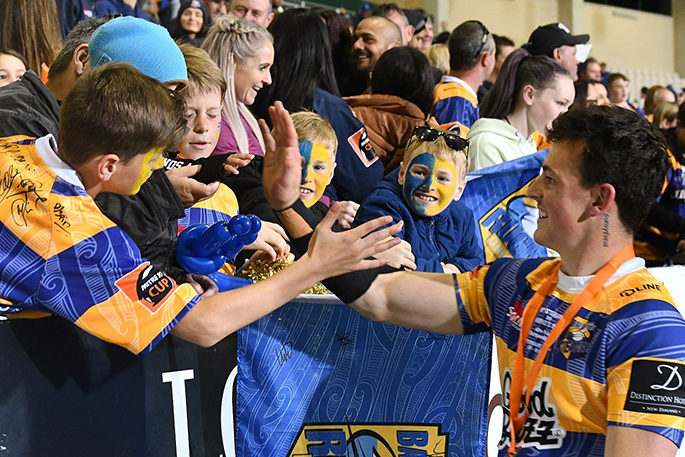 Bay of Plenty trusts and businesses have gotten behind Bay Rugby’s call to use the profit from last week’s Steamers game to put towards Junior Rugby.

Bay Rugby chief executive Mike Rogers says local trust and businesses have shown their support of the Union’s decision, by getting behind the “Ball for All” project, which will see up to 11,000 specially designed rugby balls going to all girls and boys who play for a club or school in 2020.

“Bay Rugby knows the importance of investing in our future and what better way to do that, than by using the net profits from the Steamers’ Mitre 10 Cup Championship win to benefit junior and teenage players directly,” says Mike.

Rotorua Lakes Council, which has partnered with Bay Rugby to host Steamers’ games and initiatives in Rotorua, sees obvious benefits in the Ball for All project.

“For us it’s about rangatahi - young people, making sure they get out there and enjoy the game of rugby,” says Council’s sport development manager Steve Watene. “It’s making sure our kids are active and that they’re engaged. We know there is a trend for our rangatahi to move away from playing an organised sport and rugby is not immune to that.

“So we want to make sure we are doing whatever we can to get our kids engaged in sport. It doesn’t matter if it’s rugby, rugby league, football or whatever, as long as it encourages them to be part of a team and sees them on a positive pathway into the future then we are proud to be a part of that.”

Putauaki Trust chairwoman Kiriwaitingi Rei says the trust is delighted to get behind the initiative.
“We understand how rugby transforms lives and positively contributes to the communities that we live in, and we applaud the Bay of Plenty Rugby Union applying the profits from the finals towards junior and teenage rugby,” says Kiriwaitingi.