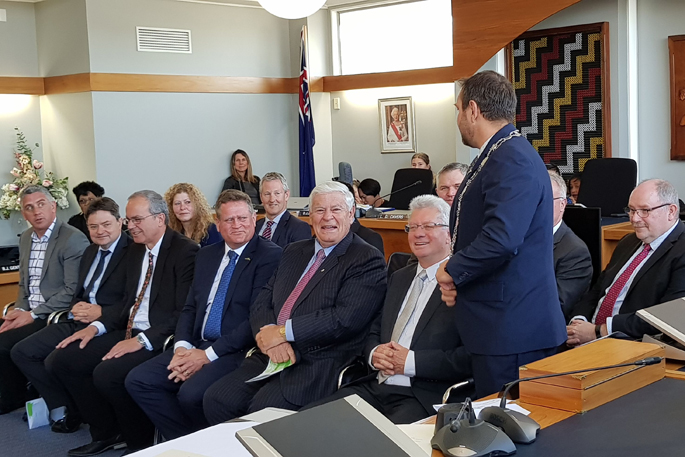 History was made on Wednesday October 30 in the Hauraki District.

As well as welcoming a new Mayor for the first time in 15 years, the district has its first ever Maori Councillor.

“What a way to start the next three years,” says new Mayor Toby Adams.

“The history, mana, and emotion of the powhiri and waiata really got to all of us. To see so many people coming together in the council chamber to celebrate this new era was very humbling.”

Tamariki from Tirohia Primary School and Paeroa College burst into a rousing haka as the mayoral chains were placed around the new mayor’s neck.

The links in the mayoral chain had to be shorted to fit, but Mayor Toby acknowledged that the links to the legacies of outgoing mayor John Tregidga and previous mayor Basil Morrison, are much longer.

Basil says he’d grown up on the banks of the Waihou River and had been connected with the council for at least 30 years. Stressing what serving the Hauraki District has meant to him, an emotional Basil says ‘this chamber, this place, is special, it’s my heart’.

“We bring diversity and separate ideas to the table in this chamber. We want our councillors to ask the hard questions, make a decision and then commit to paddling our waka together for our communities and whanau,” he says.

A short council meeting was held following the ceremony. Mayor Toby’s first order of business was to announce Councillor Paul Milner as the new Deputy Mayor.

“At most of our council meetings we can have plenty of empty seats, but not today. I encourage you to keep attending future meetings to support your councillors and communities.”