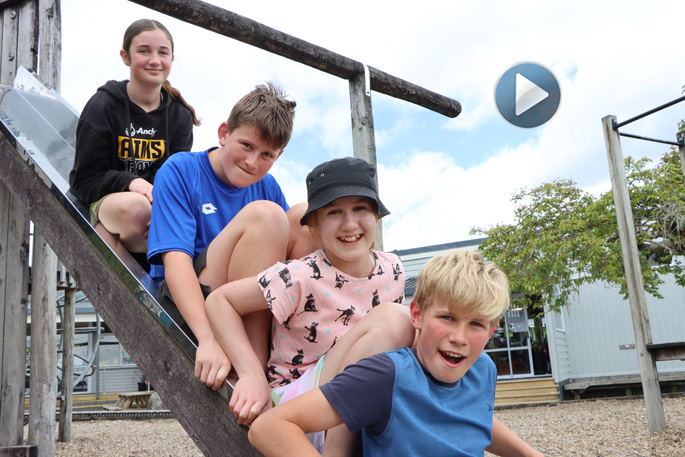 It’s a playground that children at Pyes Pa School has grown up playing on, but it is soon set to be demolished.

Due to the newly constructed commercial buildings in The Lakes, Tauranga and Mount Manganui, principal Blake Carlin says the road in front of the school has been seeing a lot more activity.

“We’ve had a couple of crashes in front of the school, so there has been an ongoing collaboration between NZTA and the Ministry [of Education] to create a pick-up and drop-off zone and also a bus turning bay to make things a lot safer.

“Unfortunately as a result of that, we are going to lose some of the road frontage, so that’s going to affect our playground. So we’re going to need to move our playground from the front of the school out to the back. Hence the need to raise some funds for a new playground.”

He says creating the drop-off/pick-up zone will be a positive for the school and will make the front a lot safer.

“We’ve had three recent crashes in front of the school, which are testimony to the need for this project.

In order to raise funds, the school is holding a gala day this Saturday, November 2.

“The gala is just a good community event, is something that has been done previously. We haven’t had a community event for a couple of years now, the last one being our night movie.

“So this year the PTA decided to breathe a bit more life into the gala again and it’s just a chance for the community to come together in a bit of a celebration as well and raise some money for a good cause.

“We look forward to some of our teachers getting wet from the dunk tank. We look forward to bringing back some classic Kiwi events such as ‘Dent the Dunga’, paintball shooting activities and just some of your good country fair sort of stalls,” says Blake.