Wheels in motion on Mauao fix 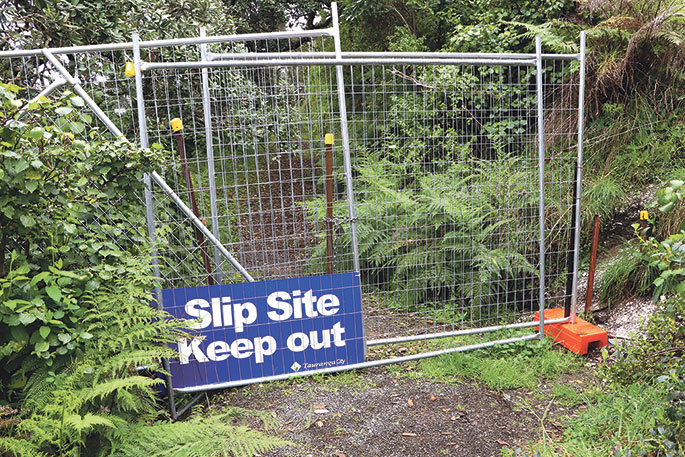 Part of the base track has been off limits, with walkers having to traverse steep stairs to by-pass the damaged section.

The Mauao Base Track is on its way to being repaired.

Tauranga City Mayor Tenby Powell wants to make sure the track is fixed quick-smart, after being out of action for more than two years.

Along with other councillors, Tenby has met with the Mauao Trust Board twice over the past two weeks to discuss remediation of the track.

"As a consequence of this reengagement with iwi, I believe we have an opportunity to repair the base track expediently," he says.

Tenby would like to see it repaired before the summer season kicks in.

Box steps are installed up and around the slip site as temporary access, which prevents the elderly, those with young children and people in wheelchairs from using the track.

"It’s very inconvenient for the elderly and mothers with young children and buggies. Like many of us, I have helped the elderly over those steps or mums carry prams," says Tenby.

"We need to get cracking and get it fixed."

He reiterates the slip is not nearly as bad as it has been made out to be, but could not estimate how much repairs would cost at this stage.

"I can't speculate on how much it will cost to repair, but would be reasonably sure it's nothing like the eye-watering figures that were mooted previously."

Protecting the maunga is highly important, as is understanding the needs of iwi, Tenby says.

"It’s a critically important taonga for not just the Bay of Plenty, but for New Zealand. We need to be very careful about how we manage it for this generation and future generations."

Chairperson of Nga Poutiriao o Mauao joint administration board Dean Flavell says engagement so far has involved having frank, honest conversations about how the matter can be alleviated.

"We have looked at the current track, considered the previous proposal and are possibly looking at an alternate solution," Dean says.

"A lot of it is around trying to reduce the cost of the fix, but also ensuring that it's safe for people whatever that option is."

The newly-elected mayor took to Facebook last Friday after meeting with Mauao Trust Board, saying quick progress is a result of meeting face to face with Trustees.

"I look forward to leading a council who continues to engage openly and constructively with iwi on the many issues Tauranga faces, and on which a trusted partnership will rely," the post read.

Only in Tauranga could this take so long!

Great news about the Mauao Base Track.I am certain TCC’s ratepayers will be happy for their money to spent in this area. I also think the TCC ought to ask the Port of Tauranga to come to the party with either (or both) of a financial in-put from their millions of dollars annmual profits, or offer of use of their dredges and barges to transport rocks and gravel if the 350 metre track is gone ahead with. A board walk type repair over the 12 metres long slip will be far cheaper and just as safe if well built and supported by power poles etc. Well done Tenby !