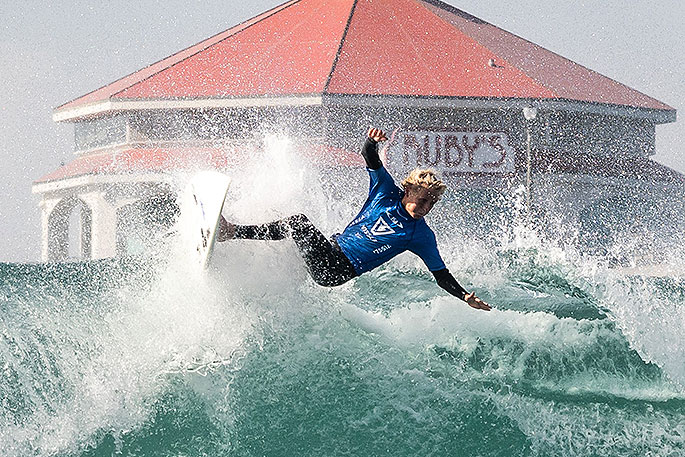 The young surfer advanced into the final 16 surfers in the main round of the event on Thursday.

Lee was supported by Saffi Vette (Gis) and Estella Hungerford (Chch) who fought back in the repechage rounds of the Under 18 Girls Division to remain alive in the event.

Day four produced the best conditions yet at Huntington Beach, California with the offshore Santa Ana winds blowing for much of the day, grooming the clean 1.0m swell.

The Kiwis still had to hunt out the elusive peeling waves with the vast majority waves only allowing for short rides.

Lee posted an 11.10 point heat total to advance alongside American Taro Watanabe, together the two surfers ousting opponents from Argentina and Israel.

“At the start of the heat I only got closeouts, so the whole time I was just searching for a wave that would let me link some turns. Once I got my first good right, I knew I needed to back it up” said Lee who found his second ride almost instantly elevating him from fourth into second.

“I knew that my second wave would push me into the progression zone. When they said I was in second place, there were only four minutes remaining and I could see everyone on the beach waving at me to sit on the person that was in third so I just sat on him until the end of the heat,” says Lee of his tactics.

Lee is a first time participant at the event and is happy with his progress to date but continues to feel the nerves and pressure of the international arena.

“I am getting used to the environment and everything over here so it is making me feel more at home slowly. I am excited about my next heat, hopefully, I can get some good waves."

Raglan’s Caleb Cutmore had earlier finished third in his heat in the same round and was relegated to the repechage after being defeated by surfers from Hawaii and Brazil.

Cutmore was left chasing a 6.53 point ride in the dying stages of the heat, a solid score in the conditions of the day. Mount Maunganui’s Luke Griffin was ousted from the Under 18 Boys Division finishing in 65th overall.

Saffi Vette (Gis) won her second-round match up in the Under 18 Girls Division despite knowing she has more to give at the event.

“I thought I could have definitely put on a better performance but I am stoked to have made another round in the reps. It’s a long event so you have to save some of your best surfing for last,” says Vette.

“My heat strategy has remained the same even though I am in the repechage rounds. I am just focussing on the waves before my heat and sticking to certain landmarks is the key. To keep going deep into the event I need to stay confident and well-rested too.”

Vette, along with Hungerford will get a day off tomorrow as the eight-day event churns through more repechage heats.

Tom Butland (Tara) could not back up his day three performance and was bumped into the Under 16 Boys Division repechage rounds with a fourth place finish today.

Overall it was not a good day for our surfers in the Under 16 Boys Division with Tom Robinson (Whgnrei) exiting the event in 65th overall while Jayden Willoughby (Rag) did not surf.

Please see below for the day 5 schedule (New Zealand times):

Caleb Cutmore, Jack Lee, Saffi Vette, Estella Hungerford and Tom Butland will have the day off.

The team is competing at the 2019 VISSLA ISA World Junior Championship being held at Huntington Beach, California, USA from the 26th October – 3rd November. In 2018 the New Zealand Team placed twelfth overall. Japan stunned the event winning the team title over USA and Australia.