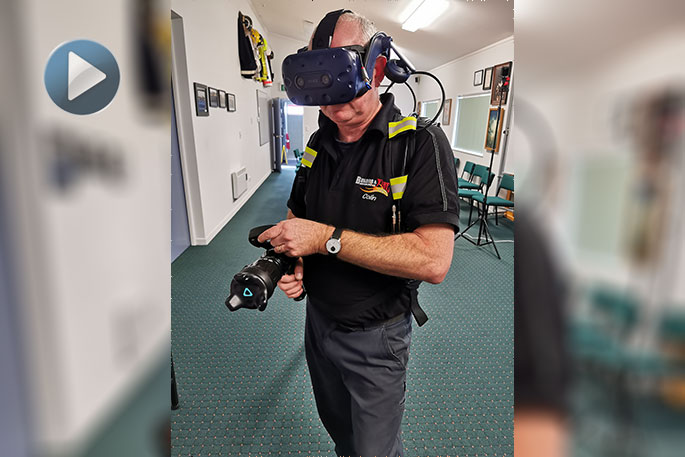 Kiwi firefighters and other first responders are set to benefit from the introduction of new virtual reality training.

The new training technology, developed by a university academic, helps prepare firefighters for complex and unsafe scenarios which are difficult to reproduce using traditional training methods or are no longer possible due to environmental, community and regulatory constraints.

In addition to a VR headset and breathing apparatus, the FLAIM system incorporates an industry-standard hose-line system and protective clothing which produces realistic heat generation - simulating the temperature increase that occurs as the wearer approaches or fails to adequately control the fire.

The system’s haptically enabled hose-reel can replicate the jet reaction force of up to 700kpa / 100psi of water pressure while gathering real-time performance data and analytics to aid an individual’s training.

The new technology was developed by Associate Professor James Mullins at Deakin University’s Institute for Intelligent Systems Research and Innovation in Victoria, Australia.

James, himself a volunteer firefighter, wanted to find a way to train other volunteers on how to simulate immersion into a bush fire, without which a novice firefighter may be overwhelmed when facing a bushfire for the first time.

The virtual reality system provides an alternative to the use of toxic firefighting foam in training scenarios.

While PFOS is banned completely in New Zealand, and another PFAS chemical, PFOA, is not approved for use in fire-fighting foams, airport fire crews have five years to phase out their supplies, despite the chemicals being banned for close to a decade.

Residue from firefighting foam has been found ground water supply in sites around the world with research underway to better understand the impact of the substances’ toxicity on human health.

Managing director of Building and Fire Services and health and safety consultant Mike Lindsay, says the technology allows firefighters to experience unique scenarios which would otherwise be too dangerous or expensive to replicate.

“The costs of building training scenarios for fire and emergency services can become expensive in both financial and environmental terms.

“At the same time long-term exposure to potentially carcinogenic emissions from fires and foam retardants for firefighters and in particular trainers, increases the risks to their health.

“This virtual reality system was designed to accommodate the increasing need for training of new firefighters and has been adopted by firefighters in 15 countries around the world,” he says.

Colin Thomson Kamo Volunteer Fire Chief with more than 30 years’ experience, who is also a fire and safety systems trainer, says the new tool provides a close approximation to the experience of a range of dangerous fire scenarios.

“As risks of global warming and its effects on spawning scrub fires become more evident new ways to train firefighters have been developed that are safer and more economical than conventional training techniques which involve exposure to the hazardous emissions of fires,” he says.