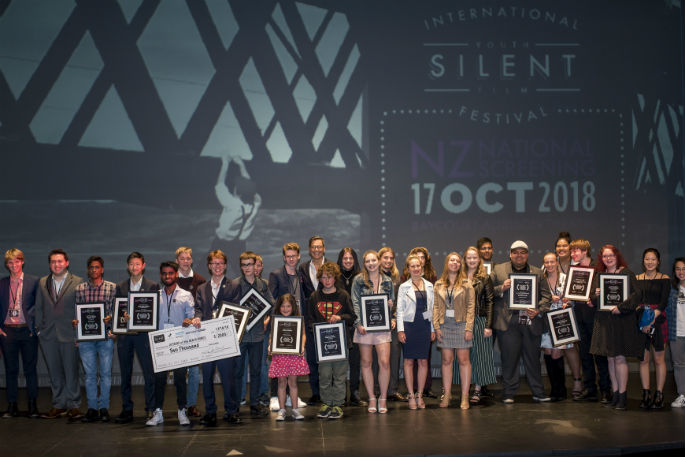 Tauranga Girls’ College will have a massive presence at the upcoming International Youth Silent Film Festival New Zealand National Awards Final with six students making it into this year’s Top 12.

Caitlin Robb (Courage), Elena Broadfoot and Courtney Thomas (Cut and Paste), Rebecca Eggersglusz (Entanglement),  Daryn Bernice Saludez (The One Who Killed the One I Loved), and Lea Foxcroft (Young George) will all be celebrated at the IYSFF NZ National Awards Final at Baycourt Community & Arts Centre on Friday, November 8, from 7.30pm.

The IYSFF is an international filmmaking competition that challenges filmmakers, aged 20 and under from the United States, Australia, The Middle East and Aotearoa, to create a three-minute silent film set to one of 10 musical scores composed especially for the festival.

Also making it into the Top 12 is former Tauranga Girls’ College and current Massey University student Jiyun Jeong (Trail). This will Jiyun’s third finals appearance – in 2016 she and fellow Tauranga Girls’ alumni Nathalia Luna won second with their film The Other Side of the Mirror, while in 2017 Jiyun took out first place with her film Tonight.

Baycourt has hosted the IYSFF competition since 2016 and manager James Wilson said picking this year’s Top 12 films was once again a difficult task.

“I’m constantly startled by the talent, imagination and ambition that is displayed in the short silent films that we receive each year, and 2019 is definitely no exception.”

The Top 12 IYSFF NZ 2019 finalists will compete for a cash prize pool of $6500 across nine category awards, which includes $2000 for the first place winner, $1500 for second place, $1000 for third place, plus the chance to represent Aotearoa at the IYSFF International Awards 2020 held at Hollywood Theatre in Portland, Oregon, US.

At the awards final, all 12 entries will be screened during the ceremony, with their soundtracks played live by acclaimed Australian organist David Bailey who will perform on Baycourt’s Mighty Wurlitzer theatre organ.

“We’ll be rolling out the red carpet for the awards final and if you’ve not experienced the power of the Wurlitzer in action, treat yourself and join us for a night of new, emerging cinema. And who knows, maybe the next time you see some of these young auteurs their names will be up in lights in Tinseltown.”

For James, one of the most satisfying aspects about the IYSFF competition has been witnessing Kiwi filmmakers succeeding on the international and national stage.

Furthermore, for Random Act of Kindness lead filmmaker Benaiah Dunn, it was his second time on the podium after his 2017 entry The Chase also won third place at the international awards in 2018.

Tauranga filmmaker Rose McMahon, who won plaudits and prizes for her 2017 entry The Smile Shop, had the web series she created In The Rainbow picked up and released on TVNZ On Demand back in June.

“The IYSFF may sound a little ‘niche’, but it’s a glorious niche that is fast developing a reputation for seeking out the next Taika Waititi or Jackie Van Beek. The possibility of a future Oscar award winning filmmaker started their journey with us is an idea that makes us feel truly proud and humble.

“Every year we have loved watching young talented Kiwis embrace their creativity and flourish because of the IYSFF NZ Nationals. Long may it continue.”

The IYSFF NZ Nationals 2019 is proudly delivered by Baycourt Community & Arts Centre in association with Bay of Plenty Film and major media sponsor The Breeze Tauranga.

The IYSFF NZ National Awards Final is on at Baycourt Community & Arts Centre Addison Theatre in Tauranga on Friday, November 8, from 7.30pm. Tickets available from the Baycourt Box Office or online from: www.ticketek.co.nz