Lellman off to a flying start 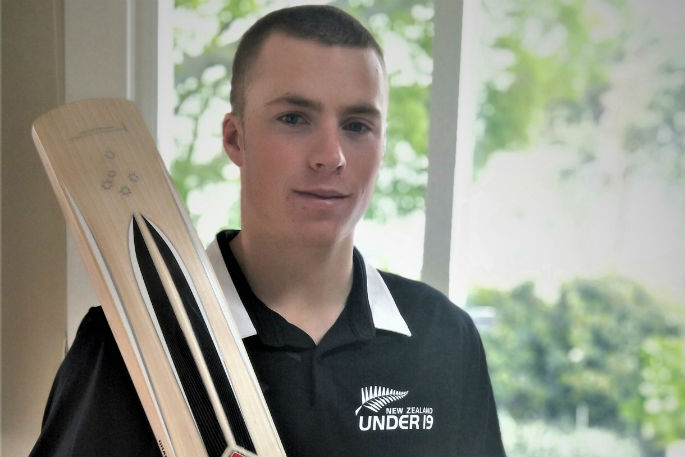 When Fergus Lellman went out to bat on debut for NZ Under-19s against Bangladesh earlier this month he was not sure what to expect.

He had missed most of the training camps ahead of the ODI series played in Lincoln, Christchurch so was just happy to be in the NZ squad along with Tauranga friends Ben Pomare and Tim Pringle.

As far as international debuts go it is as good as it gets.

The Aquinas College Head Boy says he had no expectations apart from taking every opportunity that came his way.

“I looked at it as a learning experience. After the first game I realised that while these Bangladesh guys were really good we were on nice wickets with runs to be had. Once I stopped putting them on a pedestal it kind of humanised it and became a lot easier.”

Fergus is not getting carried away by his recent success.

“I found it a bit hard to get too excited about it as the way I saw it I was the same player before I got in the team. Probably the most pleasing part was to back up the hundred. I was just trying to enjoy it out there and backing my game and taking the same confidence in as I would playing for my club (Otumoetai Cadets) or any other match.”

Fergus lives in Pillans Point, a lofted cover drive from where Kane Williamson grew up. The Black Caps batting star and captain also captained the NZ Under-19 team while at Tauranga Boys’ College.

“You couldn’t really ask for a better role model, not just as a cricketer but as a person,” says Fergus. “How he holds himself on and off the field is pretty incredible. He is just hard work and determination and obviously very talented as well.”

Speaking of the Black Caps captain, could someone please explain how Kane is not a finalist for Bay of Plenty Sportsman of the Year?

Tauranga fans are rightly angry he has been snubbed like this. After being awarded Player of the Tournament at the Cricket World Cup and coming within a run out of captaining New Zealand to their first World Cup title he deserves better in his own home town.

Another glaring omission is Sam Tanner in the junior sportsman category. The Tauranga athlete broke the NZ U19 and U20 1500m records last summer.