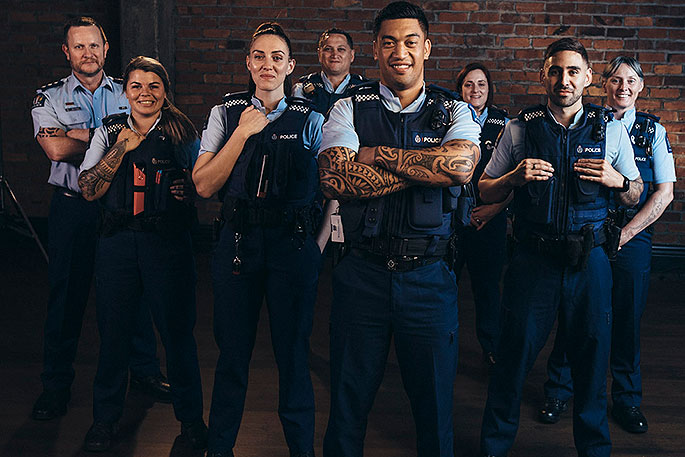 The officers chosen to be part of the new campaign. Supplied photos.

The police's new recruitment campaign - The Ink beneath the Blue - invites the public into the lives of some of officers who literally wear their hearts on their sleeves.

It’s the stories and very personal experiences behind why they got their unique tattoo combined with the training provided by police, which equip these officers to police more effectively and empathetically in diverse communities.

All police staff were invited to participate in the campaign and an unprecedented number put their hand up to tell their stories.

The seven staff chosen to be in the campaign, all have different personal experience and cultural backgrounds.

This recruiting campaign targets 18-30 year-olds from the Upper North Island area to join the police.

While the great majority of recruits already have a tattoo, it's still one of the most commonly asked questions of the recruitment team.

“I believe this is one of the most powerful and emotive recruitment campaigns we have done. I think our video speaks for itself and I hope that it resonates with our key audience and encourages them to join," says DCE Media and Communications Jane Archibald.

"This campaign focuses on the importance of bringing your authentic self to policing and shows how someone’s own personal experiences can be valuable to their work.”

Police has set itself a target of transforming its workforce so that it fully reflects the communities it serves.

Constable Angel Pera is a recent graduate of the Royal New Zealand Police College and is a young single mother, with Tā moko about her whanau, whenua and whakapapa.

All of which contributed towards her journey and career with the New Zealand Police.

“I carry the mana of my Tupuna (ancestors) wherever I go, this is where my strength and determination comes from," she says.

Many tattoos have cultural meaning, showing strength or mana, or life experiences, bringing whanau together, with a connection to heritage.

Constable Tephui Rudolph has memories of his family, a sister who died of cancer tattooed as angel wings on his body.

“I moved away from my parents at a young age and the tattoo in relation to that talks of courage, independence and strength.

"I have a new one in progress which brings both my mum and my dad’s side together. It also tells the story of the beginning of a new career as a police officer and the hurdles I had to finally graduate.”

“I have several tattoos with various meanings and through age and experiences I have a number of stories to tell. This bird represents my freedom to express myself and be my true self, at work and home, the colours represent our rainbow communities,” she says.

Maori Responsiveness advisor Sergeant Juanita (Whiti) Timutimu thinks she is the only serving police officer with a moko kauae. 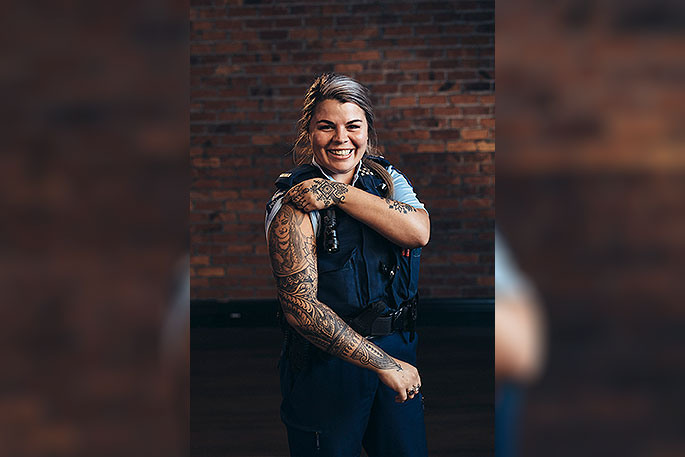 Amber is currently serving as a police officer in Opotiki.

"This is only given to wahine. Two of my kuia had kauae and it was a great privilege to receive it.” Police are people too and we want the public to know that our staff sometimes make a connection with the people due to their tattoos not in spite of them."

It was a first for the Police, with the Maori responsive advisor becoming the first female officer to have a moko kauae.

“In our role as Maori police officers, we bring everything to our mahi. It’s not just about our reo (language), it’s about everything that encompasses being Maori — including moko.

“I hope that our young ones with moko kauae, who want to come into the Police Force can feel that they can.”

If you are interested in joining police, whether you are tattooed or not, and have some more questions about tattoos or any part of the recruitment process, contact www.newcops.co.nz to find out more.

I remember the good old days When a police officer (male) had to be at least 6 foot tall, no criminal convictions, no tattoos - no association at all with any gang links - have a minimum IQ of 100 with above average literacy skills and preferably with some form of martial art training Oh how the times have changed