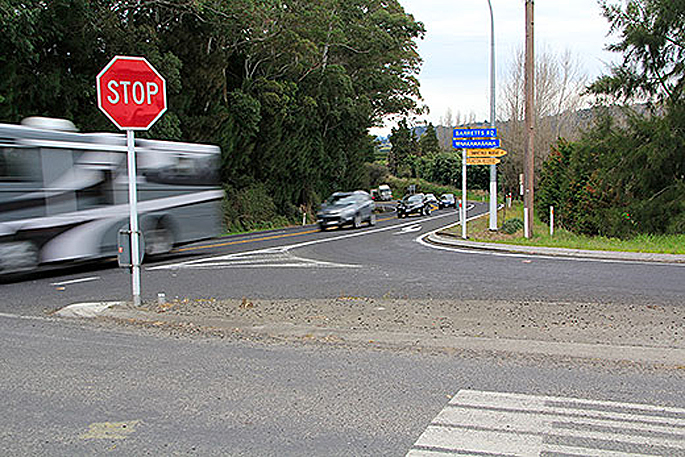 It’s a simple message, but an important one as Auckland Police urge motorists to think about their driving behaviour and decisions they make behind the wheel this Labour Weekend.

Police are releasing a shocking video showing the true impact that bad driving behaviour can have on a victim and their whānau.

The video can be viewed now on the Auckland City District Facebook page.

A year ago this weekend, 18-year-old Cameron was riding his bike along Maskell Street, St Heliers with full safety gear - including lights and a helmet - when a motorist failed to stop at a stop sign.

Cameron collided with the vehicle and was hit by a second vehicle travelling in the other direction.

He was not expected to survive.

“Cameron was on his restricted license and did everything right that night.

He had just made prefect camp and was out with his friends,” says Inspector Scott Webb, Tāmaki Makaurau Road Policing Manager.

“Cameron, obeying his license conditions, made sure he had driven home before 10pm.

“He got on his bike and re-joined his friends before the accident happened.

“All it can take is a single moment for so many lives to change.

I hope people watch Cameron’s story and reflect on the decisions they make behind the wheel, he says.

“We’re reminding motorists to be conscious of their speed, make sure all occupants are properly restrained, don’t drive impaired and keep focused on the road.”

Earlier this year, a 26-year-old male was convicted in the Auckland District Court for careless driving causing injury.

He was disqualified from driving for eight months and ordered to pay $1000 in reparations.

Scott says stop signs are in place for a reason.

“It’s not uncommon for Police to see motorists slow down, but not completely stop at stop signs.

“A split-second decision to not completely stop and continue through a stop sign can have devastating consequences on so many lives,” says Scott.

“The flow-on effects can be far-reaching and impact those at a crash scene as well as their family, friends and wider communities.

“The message is simple: stop. Look both ways and make sure it’s clear before carrying on.”

More than half of those occurred on an urban road, with 28 per cent of crashes at an intersection.

You want the police to monitor the Stop Signs: I have personal experience of three cops in two cars on separate occasions going through two stop signs without stopping. I made a complaint, what happened, NOTHING. bah humbug

motor way off ramp cambridge rd, nobody stops there, sat and watched it. police should be parked there in a plain car they would get a years salary in a day, if they can be bothered, they would rather give out tickets on the motor way for 4klm over the limit. they should have more mufti cars, when people see a highly decorated police car there attitude changes also cell phones, 7 people on cell phones between wakefield drive and 11th ave, followed one police car came into view cell phone put down when it went passed up comes the cell phone again if that was a mufti car he would have been nabbed

Over 70% of the drivers I see exit Omokoroa Road onto SH2 treat the stop as a giveway, concentrating so hard on looking to their right to jump into any rush hour gap they jgnore the vehicle immediately infront of them that has legally stopped. After witnessing a City Council vehicle destroy the back end of a learner plater, who was doing everthing correctly and observing a Fire Service ute pull the same stunt, I notified the Police of my concerns and suggested a surveillance. End result, NOTHING! In the following three months I continued to see the same attitude so I changed my travel in time half an hour earlier. RESULT: I got rear-ended by the only vehicle on the damn road! Not happy!

Stop means stop, not stop if you can be bothered or if you feel like it. I. The US they call it Yield. Either way you have to let the other cars go first, just do as the sign says, no problem...

Stand on ANY street corner with a STOP sign and watch the drivers sail straight through - 75% plus without even slowing down. NO POLICE to been seen !! Toooo busy handing out $10/$20 speeding fines for 5/10k over the speed limit. REAL ROAD SAFETY - does NOT count - STOPPING at stop signs is "we don’t care" from the Police point of view.

Hopefully drivers using Hollister Lane and James Cook Drive get the message. No one ever stops at these intersections.