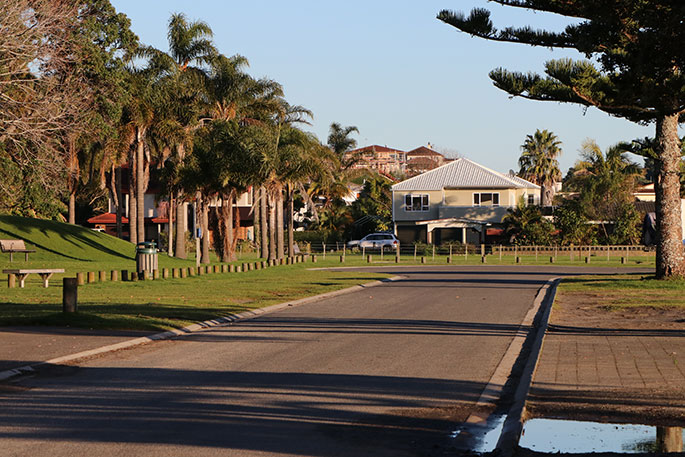 After finding out that the Tauranga City Council will be finding around $1 million dollars to fund the Kulim Park redevelopment, rather than fixing the Mauao Base Track, Adrian Muller has had enough.

He wants to put a pause on the Kulim Park redevelopment because he sees that the budget going towards that, should really be going towards the Mauao Base Track and getting that full re-opened.

Adrian wants the money to go towards the base track because for the past 20 years he has been climbing the Mount every Friday with his wife and her two siblings.

Last Friday while he was about to endeavour on the annual Friday walk, he fell over trying to get up the steps up the Mount.

“I didn’t hurt myself but I still got the marks to prove it. At the same time I saw this woman with a double pushchair and she was struggling to get up backwards and someone in front was helping get up the steps.”

One of the reasons why Adrian wants the money to go from the Kulim Park project to the Mount Base Track, is so it can be redesigned for people of all ages and accessibilities to get up and down it, and around with ease.

“My agenda is stopping [Kulim Park] and basically the million dollars that somehow council says they would like to spend on Kulim Park,” says Adrian.

“I would like to see them offering to make the base track around Mauao a probability.

“One million dollars to go to the base track of Mauao – to replace the steps which cost about a quarter million dollars which is appalling – with a track that they’ve already designed. They know what they want to do and it’s going to go down below the steps, along the rocks at the waterfront, and come up just on the other side of the steps.

“Personally, selfishly, I really love walking around the Mount. I do paintings of it all the time. I used to climb it for my spiritual renewal, but now I can’t get up and I can hardly get up the steps, falling over, and having to use a stick which is embarrassing.

“So personally, my agenda is simply fulfil the wants and needs of probably hundreds of thousands of people, local, visitors, the elderly, the young mothers and get things moving before I’m too old to do it anymore," says Adrian.

“How the TCC seems to be able to find $1 million for unnecessary redevelopment of Kulim Park, but not for the base track.” 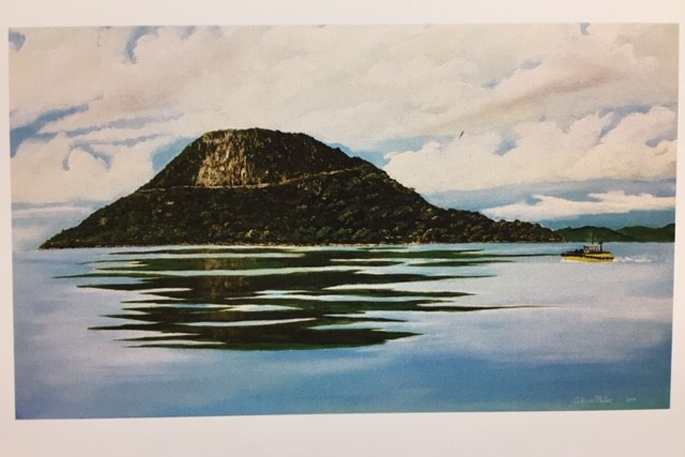 Just one of the many oil paintings that Adrian has done of Mauao.

While Adrian was on his last trip up the Mount, he met a local business man who told him that he was planning a new business venture, which Adrian believes entails using electric-powered mobility scooters which he will hire out to groups which he then guides around Tauranga and the Mount.

“This sort of venture would really suit those tourists will less mobility than most. The base track, if the steps were removed, would be a great asset to his enterprise.”

Diverting $1m from Kulim to Mauao would certainly enhance the cruise ship trade and enjoyment of these thousands of visitors, says Adrian.

The Tauranga City Council is holding a community engagement session at Kulim Park this weekend on Saturday October 26. The session will run from 10.30am to 1.30pm.

The community feedback received on Saturday will be used to make final budget changes to the design concept, and to determine the overall budget of the project, which will be presented to council for approval in December 2019.

SunLive has contacted the Tauranga City Council regarding the Kulim Park redevelopment and are still waiting for a response.

So one person wants to divert money from one project to another and this becomes a news story? What about the many people that use Kulim Park?

I’m a resident ratepayer and I like Kulim Park. It gets lots of use by multiple groups. Unlike the Mount base track it doesn’t keep falling into the sea. The base track is a bottomless pit of money swallowing nonsense. And I don’t care about Cruise shippers. They don’t pay rates. They do however pour money into Mount businesses so how about Mount businesses and residents fund the money pit?

Please add the $1million to repair the track. Tauranga needs this wonderful asset.

… they were looking at $3million for the base track. The problem I have with that is that it is very likely there’ll be more storms, tidal surge , or even an earthquake and the whole lot is wasted. I’d like to see a much more flexible solution than a permanent track. Start designing on the basis that it will need to be repaired pretty often, and make those repairs easy to make (and much cheaper than $3m...). Of course, $1M for Kulim Park is no problem when you are spending other people’s money... Let’s do both...