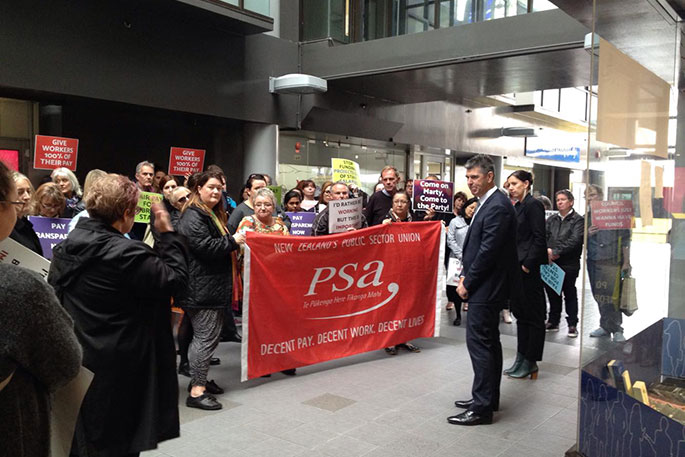 UPDATED 3.02PM: Tauranga Council CEO Marty Grenfell has met with strikers outside council chambers on Willow St this afternoon, saying that he will address their concerns by July 1 next year.

“My understanding is that this has been going on for years. I am committed to settling in a manner as quick as we can with a commitment to address your concerns by July 1st, which is in time essentially for the next bargaining collective.”

Marty says he is happy to start the conversation tomorrow about how they can reach PSA’s goal.

“I am happy to start the conversation tomorrow about how we can reach your goal, which is essentially our goal too. I believe that on average, that we should be paying 100 per cent.”

Striking staff members were not satisfied with Marty comments, with one frustrated woman saying he is in a position to resolve the current issues now.

“Next years too late, we are here now and this has been going on for years,” another protester said.

Marty says immediately addressing the needs of strikers would negatively impact other council employees who are not members of The Public Service Association.

“By doing what you want me to now, that impacts on a whole lot of other people. As an employer, hand on heart I want to be fair and equitable to all.”

A spokesperson from the Public Service Association thanked Marty for addressing the strikers but reiterated that many PSA members are not happy.

It’s meaningful to us that you came down here, but I also want to you to acknowledge we don’t take strike lightly, and we did try to warn that people are deeply unhappy and frustrated.”

As Tauranga’s first council meeting since the election gets underway at 1pm, councillors will be greeted with a picket line as city employees strike for two hours.

Tauranga City Council determines staff salaries using a system that pays them less than the national median rate for their profession, and staff say they are fed up with it, says a statement released by PSA.

"It seems ludicrous, but for our underpaid members the problem is all too real," says PSA organiser Angela Collier.

"Tauranga City Council first figure out what a council employee would typically be paid elsewhere in New Zealand, and then they deliberately pay them up to 10 per cent less for years on end."

Other city councils such as Dunedin or Christchurch initially use a similar pay system for new employees, but guarantee automatic progression to the full median rate after two years of training and experience.

Some Tauranga council workers say they have been underpaid through this system for over a decade, despite also being recognised by the council as high performing employees.

"It takes time to learn how to do your job efficiently and effectively, and two years is more than enough time to do that," says Angela.

"At that point it is only fair to expect you should be paid at the full and appropriate rate, and this is all our members want to happen. Unfortunately, Tauranga City Council at this point seem more interested in stubbornly clinging to a failed system."

Tauranga City Council currently has 68 staff vacancies, 11 of which have been vacant for over a year, and the shortfall has significantly increased the workload of current staff.

In an effort to fill these vacancies, some new staff have been hired but paid the full median rate from day one, while other gaps are filled by contractors.

"Everyone deserves decent pay, including recent hires, but it is obviously unfair for a more experienced worker to be paid less than someone new," says Angela. 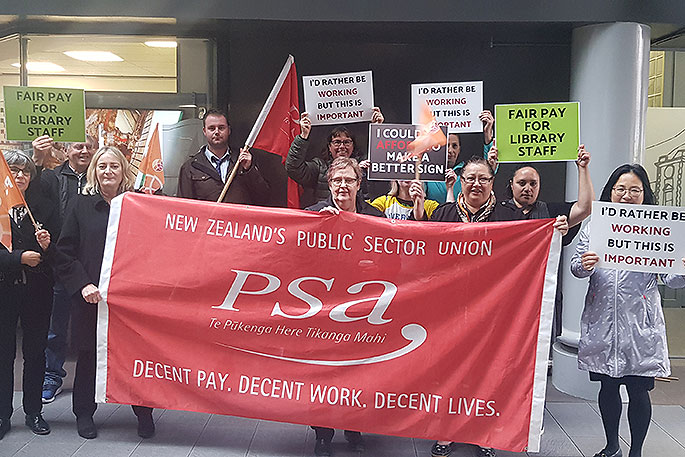 "If the council listen to their staff and address these problems, they have an opportunity to develop a reputation as a fair and supportive employer. This will help attract new staff far more than a reputation for paying people less than they’re worth."

A woman who walked past the protest says you can hear people chanting for fairer pay.

After reading the salaries and slicing up of the Management pool, I can understand there is discontent. It’s true that this is a service sector and you could maybe do better in the private sector, but it isn’t always easy to change jobs. The REAL problem is unfair distribution of the funds that ARE available. Nobody should be working in a Government job for less than minimum wage, and what is needed is an overhaul that recognizes merit and pays a bonus when people achieve or excel their KPIs and targets. A more equitable redistribution, including the "lower ranks", is what’s needed here.

they get two much now for the crap they dish out, have you ever tried to do business with them it’s Disney land. more pay what a joke, look at the lakes debacle that’s just one of many.

"recognised by the council as high performing employees" Who is the judge of that? Is it actually "The council" ? or other TDC staff? Those of us who have dealt with TDC staff and also own or have dealt with other private businesses would not consider many council employees to be efficient and highly productive! What’s more if they don’t like it let them find a better paying job in the private sector for the same amount of productivity!! There must be something else that keeps someone working for what they consider to be low pay for ten or more years!!

This is nothing new. It has been going on for years. Because Council pay the medium of other like Councils, staff will always be behind. One year a staff member had a pay increase of 0.90% when the cost of living was 2.45%. Go figure that one. And don’t listen to one particular unsuccessful Council nominee who said staff were over paid - he wouldn’t know what day it was, hence why he wasn’t elected.

You are working for our city council ,you are serving for our community,stop trying to fleece the rate payers.Want more pay,go and get another job

They are lucky they have a job at all. Maybe they could redistribute a bit from some who are overpaid.