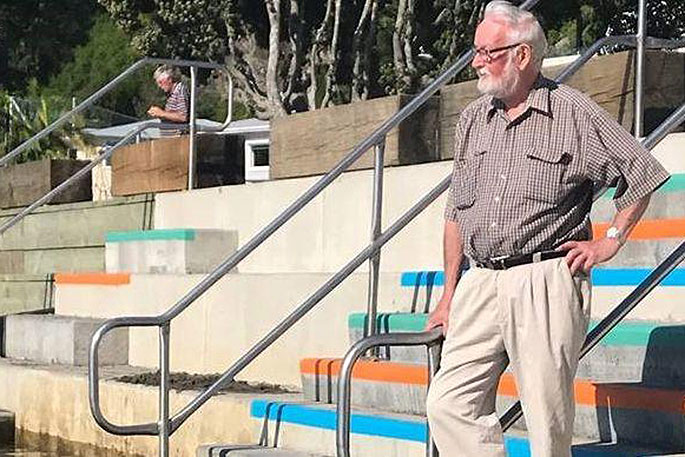 The Heads tidal pool in Whakatāne is set to remain in its current unsatisfactory state for a third summer, despite two years of public criticism.

Since the Whakatāne District Council unveiled the tidal pool in December 2017 - as part of a wider development of the Wairaka Centennial Park - it has been a source of discontent in the community.

Following continual complaints from the community of dirty, scummy water, steep, dangerous stairs and ongoing maintenance costs, the council announced earlier this year that it would look at redeveloping the site.

Consultation is planned but yet to begin with "key community groups and representatives", a move welcomed by the pool's strongest opponent who considers it has taken far too long to get to this stage.

Alexander Milne, a retired microbiologist, was so concerned about the health of children swimming in the pool, that he undertook scientific testing of the water at his own cost.

"That pool is dangerous for children, and an expensive eyesore - heads should roll," says Alexander.

"My objections have been numerous and backed with evidence, but ignored by our former mayor and council." Alexander says he sent former mayor Tony Bonne and councillors "numerous photos" of logs, crab legs, fish heads and sharp objects that swimmers were unable to see due to the murky water.

"There is a glaring double standard in Whakatāne.

"If a resident applied to our council to build a pool to the specifications of that kiddies' pool at The Heads, it would be rejected immediately and rightly so.

"The design is illegal as it fails to meet basic national safety standards, the steps are dangerous, especially for parents or caregivers. The logs, sharpies, and dangerous bugs in that pool would result in prompt closure in the civilised world."

Alexander says the cheapest option to "fix" the tidal pool would be to concrete the gaps between the steps and fill in the pool with sand.

Little agreement on what needs to be done to fix problems

An informal poll conducted by The Beacon newspaper, both in person and online, showed that although everyone agreed something needed to be done, there was little consensus on what that should be.

One person suggested a water or sand play area with the concrete "turned back to grass" for whānau to sit on as they felt the steps are uncomfortable and dangerous.

Many others say they would also prefer a sloping grass bank into the water, as it would be more comfortable and accessible for those with mobility issues.

Others say removing the concrete barrier around the tidal pool would help the water to drain and remove any debris that had built up.

The Bondi Beach Icebergs Pool was also mentioned several times as an example of a good pool, although it was noted that it was located on a beach not a river, and the cost would be out of reach for the Whakatāne council.

Many expressed their disappointment the community had not had input into the pool before it was built and described it as a waste of money.

There are also many requests for shade sails to be installed above the playground area.

There is general disappointment that users would have to put up with the pool for another summer with many questioning why it took so long for the council to take action. Residents say the council has taken too long to fix the pool. Photo: RNZ / Charlotte Jones.

Council to seek feedback on action

Council general manager community services Mike Naude says the original intention was to provide a safe swimming option in the Whakatāne river for the community and to ensure the needs of all river users were met.

"While the area has been hugely popular, we are aware that some aspects are causing concern and we want to remediate those issues to the best of our ability," he says.

The council has identified key stakeholders as Te Runanga o Ngāti Awa, the Wairaka community, the Bay of Plenty Regional Council and families.

It will provide an opportunity for them all to give feedback on potential remediation of the facility following the development of an engagement plan.

Engagement with the key stakeholders will be carried out over the coming months and any works will begin following the summer season.

"While I acknowledge the process to identify options has taken longer than anticipated, the future management of this site is a priority and it's important that we assess all options to remedy the concerns of the community," says Mike.

The council will prepare an engagement plan that includes a range of methods for targeted consultation on remediation options.