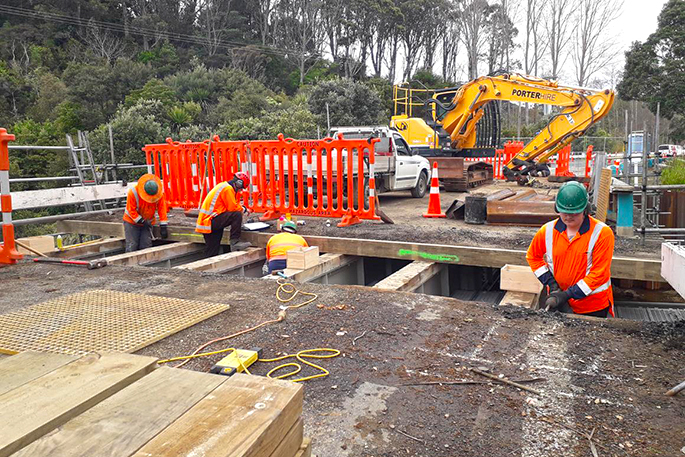 This week, Thames-Coromandel Mayor Sandra Goudie will be hosting an event to say thanks to the NZTA, its contractors and all the local residents affected by the closure of the SH25 bridge at Kuaotunu, following the September 9 2019 weather event.

The Kuaotunu River Bridge remains fully open to vehicles this weekend, but on Monday after the peak morning traffic period, there may be periodic full closures to allow for the bridge resurfacing to be properly completed.

Most of the day on Monday traffic over the bridge will be open to one lane, under stop-go management, but there may be periods of up to 30 minutes while both lanes are closed to allow work to proceed as efficiently as possible.

“The work is expected to be completed by late afternoon on Monday, after which the bridge will be fully open to traffic in both directions again,” says a Thames-Coromandel District Council spokesperson.

“Any full closures of the road are dependent on the progress of work and we don’t know when they might occur.

“Our council appreciates drivers’ patience and understanding while this necessary work takes place.”

Monday’s work is the final bit needed to repair damage from September’s storm and flooding. The bridge is on State Highway 25 and NZ Transport Agency’s contractor, Higgins, has carried out the work and reopened the bridge ahead of schedule and under trying conditions, including a second major storm earlier this week.

“A huge congratulations to the NZ Transport Agency (NZTA), Higgins and all the contractors involved,” says Thames-Coromandel Mayor Sandra Goudie.

“They've gone above and beyond and worked hard throughout the storm this week - and the past four weeks to get the bridge open sooner than planned. It was an extraordinary effort.

“We know the closure has been an inconvenience to many, but I want to thank all the communities from Coromandel Town through to Whitianga for their patience,” says Sandra. “It’s fantastic to see how communities pulled together to help each other out during this time – and also a big ups to the Kuaotunu Katchup Facebook team for helping coordinate shared transport options, along with Go Kiwi who put on extra shuttle bus services.”

Sandra is hosting an event at the Kuaotunu Hall on Tuesday October 22, between 4-6pm, to say thanks to the NZTA, its contractors and all the local residents affected by the closure of the SH25 bridge at Kuaotunu, following the September 9 2019 weather event.

All are welcome. There will be light refreshments served by Kuaotunu Kindergarten.