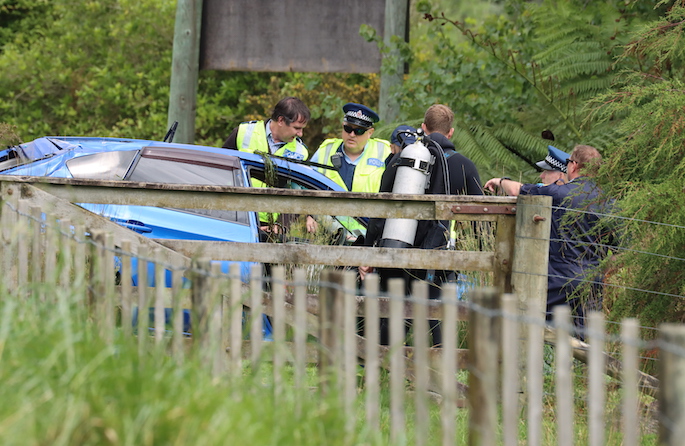 The vehicle was recovered from the Wairoa River on Wednesday. Photo: Daniel Hines/SunLive.

Police have released the name of the man who died following a crash on State Highway 29, in the Lower Kaimai area.

Shane Michael King died when the vehicle he was in crashed off the road and into the Wairoa River, between Omanawa and Ruahihi roads, at 7.40pm on Tuesday night.

The 51-year-old man was from Putaruru.

"Our thoughts are with his family and friends at this time," says a police spokesperson.

The vehicle was fully submerged in the river and was recovered on Wednesday.

Western Bay of Plenty road policing manager Senior Sergeant Cam Anderson says when the dive squad got to the vehicle, it was upside down in the water.

“At this stage, the crash is still under investigation and we don’t have the cause for it."

But Cam wants to remind people that anything can distract them and he urges people to pay attention to the road.

“With the weather we’ve had recently, particularly a lot of rain, the roads are slippery and you need to concentrate a lot more.”

Cam says a rahui has been placed on the river for about 7-14 days because of the death and the cultural significance of the area.

Hey ya Slim You post some great comments however the cause of the crash is unknown. He could’ve suffered a medical event, slumped at the wheel with his foot on the accelerator. Your comment in general is totally right but in this instance bit of a harsh call especially for family.

Drive to conditions. Slow down. Concentrate on the job in hand. Simple.