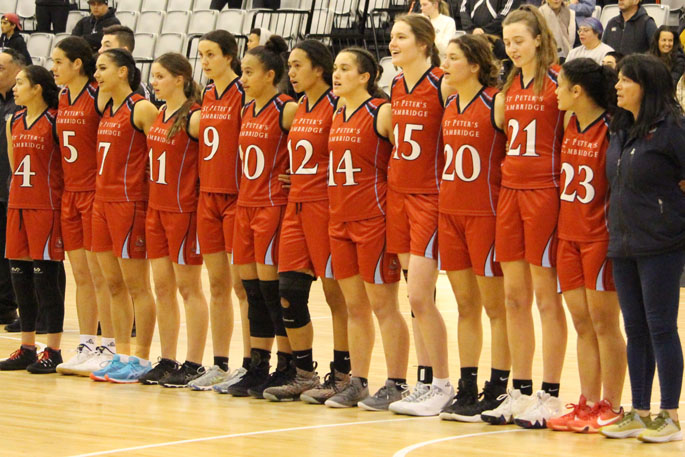 This is the pinnacle of what has been a remarkable season, the team travelled to Greece in April to finish fifth in the world ISF World Champs – losing only one game to Greece in the final quarter.

From then on, the team has been unbeaten, playing a visiting Japanese under-16 national team, winning the Waikato Secondary Schools Competition, Zone two Regional Tournament and now the national title.

Coach Leanne Walker is understandably very proud of the girls, particularly her daughter Charlisse, who has played in the team for the past five years and was named Most Valuable Player at the recent tournament.

Captain Kataraina says it was an ‘indescribable’ feeling to have won the national schools crown.

“We were just happy to come here and show the rest of New Zealand what we could do,” she says.

“Making history for our school… I’m speechless and just so proud of the girls.”

The scores were locked at 26-26 with just under eight minutes to play but it was the calm heads of St Peter’s and patience with ball in hand that saw the underdogs pull away to lead by three with the clock counting down.

Co-coach Ange Russel says it was a focused, team effort that got them there.

“Having a great team culture where every player has been part of the goal setting is important. At our April training camp we set clear goals and pathways to achieving them.

“Doing all the little things well leading up to, and including the week like recovery, hydration, sleep, nutrition, homework on our own error rates and strengths as well as the oppositions, and having the right mindset heading into every game.”

A strategy that has made history for St Peter’s.