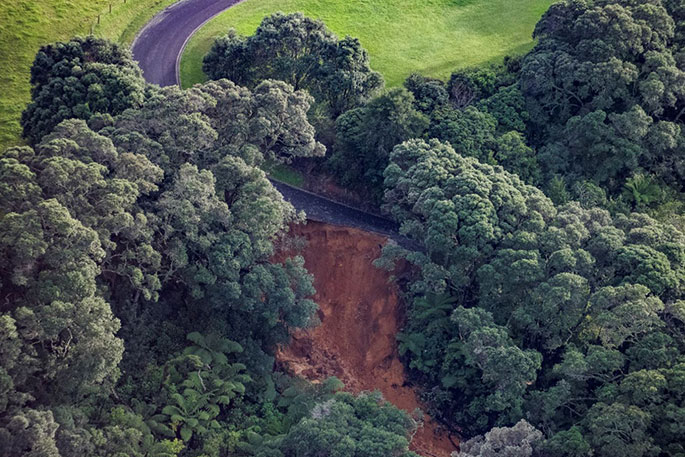 Repairs to the roadway in the Kauri Point Historic Reserve will start next month following the contract being awarded to CivilWorks Ltd.

Western Bay of Plenty District Council will spend $438,000 on the repair – well under the original estimated cost of $1.2 million.

The road has been closed since a landslip severely damaged the Reserve during cyclones Debbie and Cook in April 2017.

Project Manager Peter Clark says the greatly reduced cost is due to an innovative design solution by geo-tech company Tonkin&Taylor who opted for a rock buttress revetment rather than the more costly structural options.

“When we initially estimated the project it looked like a big job in the vicinity of $1.2 million. However as the geotechnical investigation and design work progressed we discovered it was not as costly as thought and we could still achieve the very high safety factor of 1.5 – the level required under Council’s Development Code.”

Other cost advantages are gained through a competitive market and CivilWorks being a local contracting company sourcing rock from the nearby quarry at McLean Rd, Waitwheta.

The work will take up to six months and includes the cost of an improved stormwater system that will control stormwater to the bottom of the hill.

The repaired roadway will follow the same path as the original road, but will be made safer with the addition of steel barriers along the outer side.