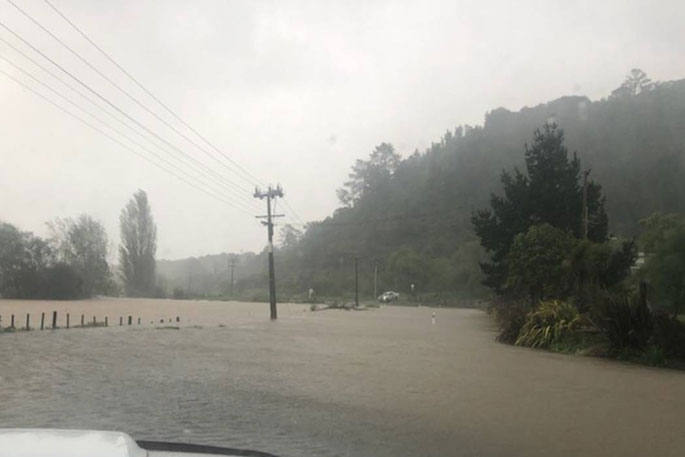 Rising floodwaters have seen about 40 freedom campers moved from a spot near the Thames airfield.

It comes after the catchment above the Kauaeranga River saw 160mm in rainfall overnight, blocking SH25 south of Thames, the Waikato Regional Council says in a statement on Tuesday morning.

A school and parts of State Highway 25 in Coromandel have closed as a result of the overnight flooding.

Those on the Coromandel Peninsula are being urged to stay away from rivers and streams, which could rapidly rise.

Whenuakite School is closed due to the flooding, according to the school's Facebook page.

A heavy rain warning, issued by MetService about 9pm on Monday, remains in place until 11am.

High tide at 9am may bring further issues, says the Thames-Coromandel District Council.

On Tuesday morning, power outages were reported in Whitianga, Te Mata and Hikuai.

Most of the calls reported fallen trees and powerlines, although there had also been flooding and a couple of roofs had lifted, says Craig.

SH25 near Wade Rd in Whitianga is closed and SH25 south of Thames is down to one lane due to surface flooding.

SH25 in Kuaotunu remains closed for bridge repairs, following damage by a storm in the area last month. It's expected to reopen by Labour weekend, depending on the weather.