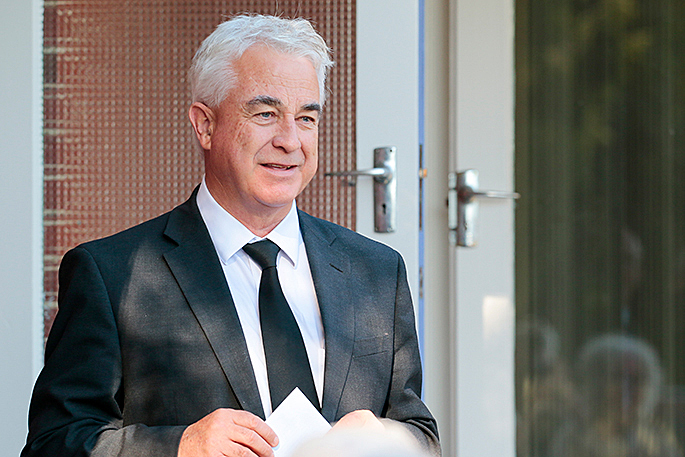 Outgoing mayor Greg Brownless plans on spending his new found time with family and has already signed up for a play.

He will be in the play ‘Noises Off’ at the Tauranga Repertory Theatre and is talking about starting a magazine.

“I'm not just business oriented, I like participating in the arts and have done for years.”

Greg was beaten at the polls by Tenby Powell in the Tauranga City Council elections over the weekend, and although he is disappointed by the loss he wishes the new mayor success.

“It's a bit disappointing of course when you have your heart and mind set on something, but if you're prepared to win you've got to be prepared to lose.

“I wish the new mayor and councillors every success because the future of the city goes beyond me being mayor or me being on the council.”

He says the past three years haven’t always been easy and he has been accountable for things that started before his mayoralty or were out of his control.

“It's been a tumultuous three years where everything that possibly could go wrong did go wrong.

“Some of those things were within my realm and some of them weren't but of course as mayor you have to take responsibility for the lot.

“If people thought the buses were terrible, although it's a different council, that's still my problem.

He says the failed Bella Vista homes development started before he was mayor but it became his responsibility.

“That's the same with all local body politicians, you’re quite accessible and it also means you did tend to get blamed. I think there are good things that have happened but they tend to get overlooked.

“I felt I started a change. It was me that pretty well drove the appointment of a new chief executive and a huge change in the management team.

“Perhaps the benefits of that will be seen during this this term and that would be good.

“I don't blame people for wanting a change because of the various problems that happened.”

As well as dealing with significant issues, Greg has also been at the helm of some notable achievements.

“During the time I was mayor there were about 5500 new houses built to cater for growth. We’ve been building about 1500 a year.

“Getting the southern pipeline across the harbour will also not only cater for growth, but will remedy the occasional instance of sewage getting into the harbour.”

Something else Greg is proud of is keeping the new Waiari water supply scheme 100 percent in public ownership. The scheme is designed to help meet the future water supply needs of Tauranga and the wider Bay of Plenty.

The Waiari Water Supply Scheme involves developing a water abstraction facility on the Waiari Stream, a water treatment plant in No.1 Road, Te Puke, and an underground water pipeline from the plant to Papamoa.

The plant will mainly service the Papamoa coastal strip and Te Tumu growth areas and in time will provide a backup for Western Bay of Plenty District Council’s Te Puke water supply.

Construction for the scheme started in March 2018 and is expected to be completed in 2021.

And then there’s cycleways and sports facilities.

“We have seen the cricket grounds at the Bay Oval be turned into a first class venue for cricket, once we got the new lights running there,” says Greg. The Bay Oval is now recognised as a genuine boutique international facility.

“There has been an enormous growth in the number of people using our sports fields and facilities and the cycle and walkways for recreation – such as the new ones opened in K Valley.”

Greg says a new mayor brings hope and excitement and he hopes the new council will be able to achieve what they have campaigned about.

“If the various things that I've read can be achieved and we can get on top of our roading problems with government assistance, keep the links to the port clear, have first class public transport and have some wonderful but affordable facilities, then great - I'll be the first to congratulate them because that's what's important in the end, not me being the mayor.”

Greg is staying in Tauranga and isn’t thinking about whether he will run in the next local body elections.

“I'm quite genuine when I say it’s a city that I love. I think my actions have proved that through what I've done in the past. I'm not upping and leaving or doing anything else; everything in all other aspects of my life will continue as normal.

“In fact, I might have more time to do them,” Greg laughs.

Well he didn’t perform well as Mayor, why would another role be any good? Will he be asleep in this new role like his previous one?

...seeing this play. "Noises Off" is an hilarious play within a play by Michael Frayn and would be my favourite piece of theatre. Goodbye to Greg and thanks for your service. Enjoy your life and indulge yourself, for a change.

You have been a very good Mayor for Tauranga but when you ignore emails from people who have issues and not have the courtesy to even reply , but you could be seen going on Board for a free lunch and not talking to any affected operators. In this instance Tourism Bop trying to create a monopoly selling Cruise Tours from Port of Tauranga and charging operators $7000 per season to be involved . For a council funded organization its not on and it needs to stop .

We’ve never met but I wish you all the best going forward. It’s been a tough three years but there are many residents grateful for all your contributions to our city. Regards, Ian Grindle