Artist sticks it to the Don 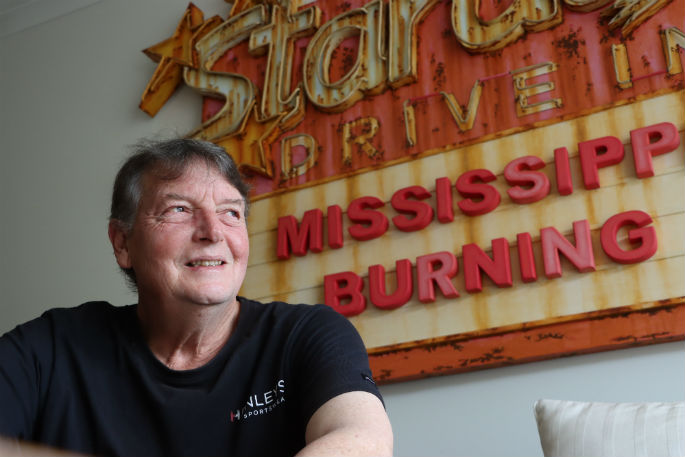 It was an artist making an ethical statement.

But he chose perhaps the most divisive and polarising subject matter of our time to make his point. And the artist has been pilloried for it.

It will be one of 16 Miln pieces that go up in the prestigious Wellington waterfront gallery next Wednesday – an exhibition entitled ‘No Vital Signs’. Hugely exciting for the artist, a real opportunity.

And while the political capital is not afraid of political artwork, elsewhere, and particularly here in Tauranga, people he feels are a bit angsty about it. “You would be surprised,” says Alex. “It’s like some of my critics voted for him, that Trump’s actually a nice guy, that he’s the second Messiah. Very peculiar.

“And they tell me they are genuinely offended by the work.”

So be it – because Alex Miln is not offended by their being offended. “No, if the artist is doing his job, people will either love it or hate it. If people are neither here nor there, they’re not talking about it, then the work must be mediocre.”

There are two more pieces – ‘Credit Crunch’ and ‘Credit Squeeze’.

“Few New Zealanders will remember or understand sub-prime mortgages, but they sure knew about the global financial crisis which followed,” says Alex. Sub-prime mortgages were granted to people with low credit rating and didn’t qualify for conventional mortgages. “They were essentially dud products but got triple-A ratings. So who rates the raters?  An interesting question.”

The artist saw the credit crunch as being hugely unfair to masses of middle-class populations everywhere. Alex has committed that unfairness to canvas in his own acerbic way.

When his Wellington exhibition is over, the Papamoa artist will focus his satirical artwork on some domestic issues that have been grating away at him.

“You have been spared so far, but RotoVegas is coming.”

What he calls the exploitation of a people in the name of tourism. “I will be asking some questions about land issues and how we have exploited Rotorua for financial gain, treated local people as some sort of circus phenomena.”

The ‘100% Pure New Zealand’ branding is something else he wants to have a crack at. “God! We have done a great job of trashing out country.”

He’s an artists with a deep social conscience who believes there needs to be more accountability.

"Make Ardern Go Away"?! How could you compare a woman who showed the world incredible sensitivity, intelligence, and leadership when under pressure, with a vacuous, bombastic, uninformed bully, who has no grace or sensitivity, who betrays his allies, and has degraded the USA and the office of POTUS like nobody ever before him? I didn’t vote for Jacinda and my politics are "middle of the road" but if I had to choose a leader between her or Trump, it’s a no-brainer...

What qualifies Alex to judge and knock Trump ? The fact that he does not care weather people like his ’works’ says he is so self opinionated and perfect...in his own opinion, that he uses his ’talent’ to attack an honorable person who does not even take payment for the good he is doing for the World. Why don’t you knock Obama or Hillary in ’artwork’ or are you scared you could end up as another corpse in their trail . Use your deep social conscience to challenge real criminals, or are you too lilly-livered.

there was no russian collusion, no stormy daniels saga which has been debunked. sounds like a lot of butt hurt by Hillary loving democrats that still havent got over her losing. He is making America great again like he promised. African americans have highest employment rate in 51 years and the economy is improving dramatically, he’s outing the pedophiles like Epstein and Weinstein (both Clinton friends), Black Americans are leaving the Democrats and joining Republican party, the Ukraine accusations are the latest false allegations against him. MAGA is what NZ needs - Make Adern Go Away