Inquest begins for man shot by police near Thames 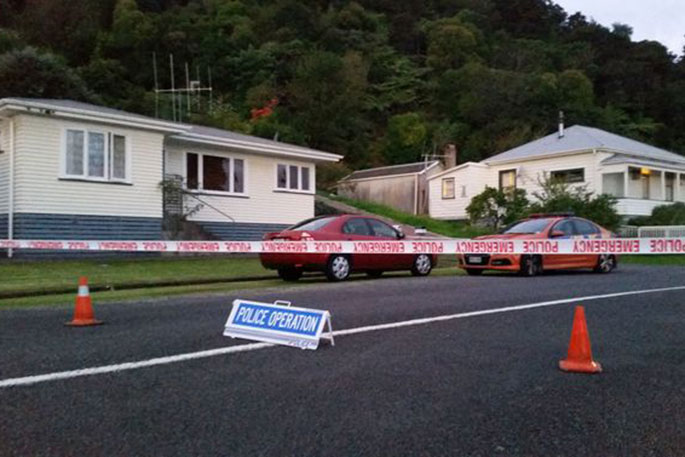 A police cordon at the scene of the 2015 shooting in Kopu near Thames. - Photo: RNZ / Nicole Pryor

An inquest will be held today for a man who was shot during an armed offenders callout at Thames in May 2015.

They were called by Mr Te Moananui's whānau after concerns he was acting in a paranoid and threatening manner.

The armed offenders squad, accompanied by a mental health worker, went to the house where Mr Te Moananui pointed a gun at two officers and ignored police challenges to drop his weapon.

The Independent Police Conduct Authority found the officers were justified in shooting him.

It said at the time of being shot, Mr Te Moananui was pointing a rifle at them and they feared for their lives.

The authority said he had told a family member that he wanted to "go out like a gangster, giving Thames something to talk about".

The night before his death, at his home in Kopu near Thames, Mr Te Moananui shot a man in the foot.

He had been under the care of the Waikato District Health Board mental health team and the police database described him as severely unwell and extremely violent.

On the day he was shot, Mr Te Moananui had covered his body in mud, pointed his gun at cars and said he wanted to be shot by officers, according to the IPCA report.

The inquest will be held by Coroner Michael Robb at Hamilton District Court.

Why is it that the police have guns! When if you have them at home you have a gun licence. And been a police officer you DONT have to have a gun licence so you shouldnt be aloud to use a gun! If we arent aloud a gun with out a licence why should you guys have one its wrong so u shouldnt be shooting people. Thats right i no you guys dont have a firearms licence unless u have them at home. And also why are u guys walking around with these guns that have to be handed in your should be to