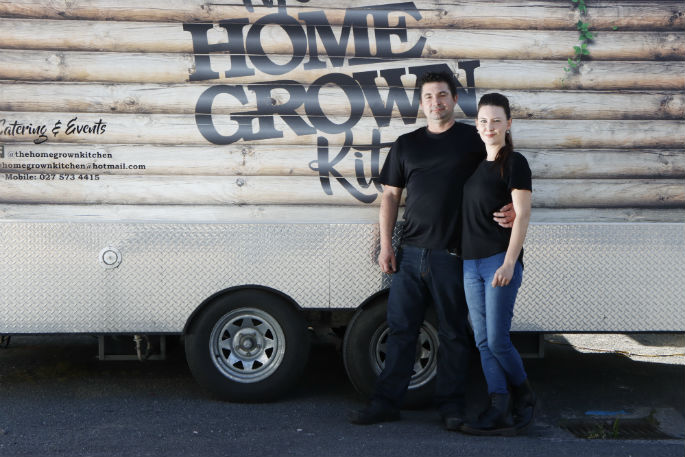 It was a serious passion project for local chef Kile Gilmore.

He and his partner Sue Scahill had been talking about starting their own food truck for three years, spent two years building it and now they’re proudly trucking around the Bay selling fantastic food from it – The HomeGrown Kitchen.

But what’s in the name?

“The name originated from our whole family having a hand in actually building the whole food truck,” says Kile.

“It’s all of us, we all had a hand in making it. We did the welding and putting the sides on, the wraps, we built the whole thing, we only bought the wheel and suspension kit.”

It took two years for Kile and his family and friends to build the snazzy food truck you might spot zipping around town or parked up at your favourite markets, and that’s because it was all done from scratch – literally built from the ground up.

“We only really worked on weekends. Dad used his weekends to weld, I used my weekends because I was working fulltime at the time, so we only had four days a week between the two of us,” says Kile.

“We had an extremely limited budget – as in we came in with nothing, we’d earn some money, choose something to work on and that’s how the process goes.”

The HomeGrown Kitchen food truck was a real passion project for Kile, who says he is used to working around food and decided to do it for himself.

“I’ve been running kitchens for all these other people and it was generally always working out alright so we decided that we needed to do it for ourselves,” says Kile.

“We didn’t have the money to own a restaurant so this was the next best thing, and we’re not getting any younger!”

Kile says they enjoy food truck life, and they’re definitely making the most of it.

You can find The HomeGrown Kitchen parked up outside Slab Brewing in Parkvale most Fridays and Saturdays from about lunchtime, as well as a plethora of markets, events and anywhere else you might expect to see a food truck.

But it’s not without its challenges.

“Weather is the biggest thing to get over. It’s all well and good having all of the bookings, but if you don’t have the weather to go with the bookings it’s a problem,” he says.

And as long as the weather plays ball, Kile and his food truck will likely be at most markets and events throughout the Bay of Plenty. They’re known for their ‘gourmet seafood’.

“We do all sorts of functions. We’re not set to one menu so we can cater to any sort of customer.

“Catch us at the Rotorua night markets, Gourmet in the Gardens and everything else in between. We’re the seafood trailer for probably most of the Western Bay. In general we’re known as the gourmet seafood trailer – so it’s not just your typical muscle fritter,” says Kile.

“We do everything from a tiger prawn yellow curry served in a crispy shell to soft shell crab sliders with chili jam and wakame, home-smoked salmon with creamed muscles and shitake mushroom gozu and more.”

And if that’s whetted your appetite, no fear - Kile and The HomeGrown Kitchen food truck will be ready and waiting to serve hungry patrons to this year’s Bay of Plenty Home Show at Trustpower Arena Baypark from October 18-20.

“We always have a good time at the Home Show. It’ll be our second Home Show but our fifth big event at Baypark and they’re all good.

“We might be doing something special at the Home Show involving Bluff oysters… keep an eye on our Facebook page!”

For more information on Kile and The HomeGrown Kitchen, check them out on Facebook or email education@waimarinotrust.co.nz