When will the election results be out? 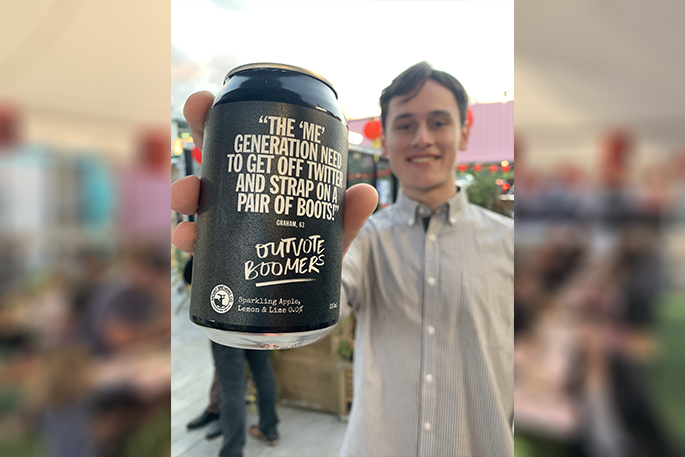 Ben Sokimi holding one of the 'Outvote Boomers' cans that were part of a youth promotion to get people to vote.

Elections of members is held once every three years, on the second Saturday in October, and closed at 12 noon today.

Western Bay District Council expect to have some progress results – from about 95 per cent of votes cast – by mid-afternoon today, Saturday October 12.

“The results will be posted on Council’s website and a media release will be sent out as soon as possible after Council receives them from the electoral officer in Auckland,” says Western Bay District Council’s Communications Team member Luke Balvert.

Ross Goudie, Bob Hulme, Marilyn Roberts and Don Ryan have been automatically elected to the Waihi Beach Community Board, as the number of candidates matched the number of vacancies.

“Preliminary results - all votes cast except special votes - are expected to be available during the afternoon of Sunday, October 13. These results will replace the progress results on Council’s website once we receive them,” says Luke.

Final results for Western Bay District Council will be available by the end of the day on October 17.

Council and Community Board members for Western Bay of Plenty District Council will be sworn in at the inaugural meeting of Council at 1pm on Thursday, November 7 2019.

Tauranga City Council will also be providing progress and provisional results on their website over the weekend.

Final results for Tauranga City Council are expected by next Friday, October 18.

Election results for Bay of Plenty Regional Council – BOPRC - will be available from no earlier than 4pm today, Saturday October 12.

“It is expected that progress results will be available on Saturday afternoon and evening,” says a spokesperson on the Electionz website.

Bill Clark and Douglas Leeder, both from Eastern Bay of Plenty, were uncontested, so will be filling the two vacancies.

Te Taru White was the only person nominated for the Okurei Maori Constituency, so has also been successful in securing that seat.

Also uncontested, and therefore successful were Stuart Crosby, David Love, Stacey Rose, Paula Thompson and Andrew von Dadelszen who have taken up the five vacancies in the Tauranga General Constituency.

Final results are expected to be declared no earlier than Thursday October 17.

In addition, following the election, the Minister of Health appoints a further four members, making a total of 11 members per board.

.....despite free advertising ,beer and a whole lot of promotion, how did the ’outvote boomers’ go then (regardless of results)?... anyone?...would we say all hype on the outside of a can?... Please....next election we need to take this seriously, you are important, you will have reasons to stand up and vote (no I do NOT mean social media) for what is important to you..because as time goes on, it WILL be....probably more than ever.....