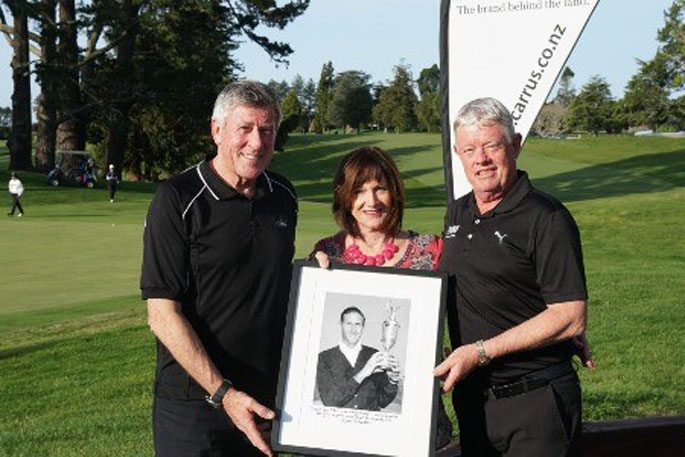 Two vital people to the success of the Carrus Open on the Jennian Homes Charles Tour were recognised for their services at last night’s Carrus Open Pro-Am prizegiving.

Sir Paul and Lady Cheryl Adams are the founders of Carrus and have supported the Tauranga event for a staggering 13 years – as long as the tournament has been in existence.

After the Pro-Am, Sir Paul and Lady Cheryl Adams were presented with a signed print from Sir Bob Charles who the tour is named after, thanking them for their ongoing support.

Michael Smith, Chairman of New Zealand Golf and President of Tauranga Golf Club presented the pair with the signed print, and acknowledged the contribution they’ve given the tournament, and the golf club itself.

“Sir Bob Charles would have loved to have been here to hand this award to Sir Paul and Lady Cheryl. They’re the longest standing sponsors of an event on the Jennian Homes Charles Tour, which is an outstanding achievement.

According to both Sir Paul and Lady Cheryl Adams the Charles Tour is an integral part of player development in New Zealand. It was important to them they supported a pathway for amateur golfers in their transition to the professional game.

“This tour gives golfers the opportunity to play against other top golfers in this country. Before we started with the Charles Tour there wasn’t that opportunity. Now we’ve seen players go on from this stage to play very well on the world stage,” says Lady Sheryl Adams.

“We’re really proud the Carrus Open is a regular fixture on the Charles Tour. I’m told this event is the most prestigious tournament in the Tauranga area so it’s an honour to be able to support up and coming talent and helping them progress to the next stages of their careers,” says Sir Paul Adams.

Support from Carrus and Sir Paul and Lady Cheryl Adams is imperative in keeping tournaments on the Jennian Homes Charles Tour alive, and to have one sponsor from the beginning of the Carrus’s inception is an outstanding achievement.