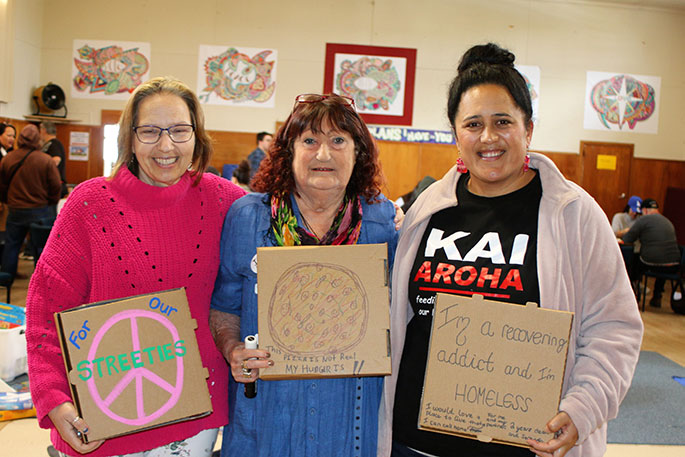 Three community services to the homeless in Tauranga are combining this week to hold an art exhibition for World Homeless Day.

Colleen Spiro from ‘Street Retreat’, Tania Lewis-Rickard from ‘Kai Aroha’, and Laura Wood from ‘Under the Stars – Homeless in Tauranga’ have asked hundreds of people to put art onto pizza boxes.

Each pizza box will carry a positive message about change, in the form of a quote, drawing, artwork, photo, drawing or any way the artist wants to convey their message.

Tania Lewis-Rickard who is an artist, art teacher at Papamoa College during the school term, and an advocate for the homeless, has been spending her time during this school holiday two-week break on this massive art project that uses only cardboard and pens.

In her usual weekly ‘free’ time she is also leading the Kai Aroha - Feeding our hungry Community team and is Chair of He Kaupapa Kotahitanga Awhina House for homeless women.

Under The Stars has been running for nearly five years, providing an evening meal on Saturdays at Cliff Rd. 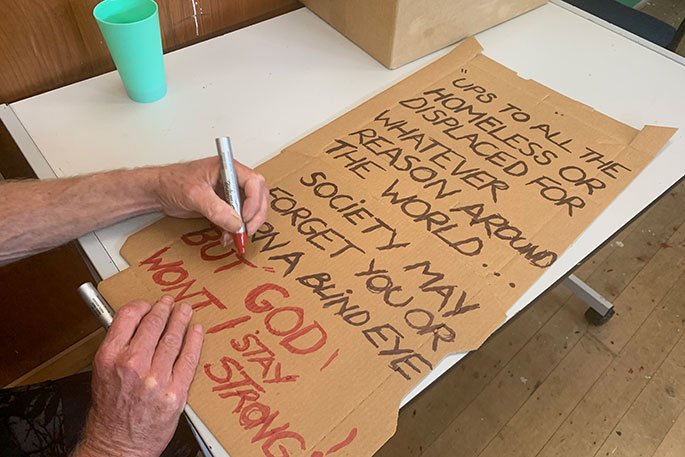 Kai Aroha is a non-profit voluntary organisation that has been providing meals to the homeless for the last three years every Friday night in Greerton, Tauranga.

“In between our jobs, voluntary work and whanau commitments we plan and organise events in support of the impoverished and homeless in our town,” says Tania.

“World Homeless Day is one of those events. It is an international campaign to draw attention to the needs of our community and to raise awareness for people experiencing homelessness.”

You can’t hold back busy people who have huge hearts, and Tania, Colleen and Laura decided to combine hearts to continue to ignite the community to do what they can to help, by organising the exhibition at The People’s Gallery at Tauranga Historic Village.

Every year Kai Aroha organises the ‘cardboard korero’ art installation community event where cardboard and paint pens are the main material used to make art for a temporary public installation.

“For two years we had been making cardboard korero for world homeless day in conjunction with mental health awareness week but this year I wanted to take this to the next level as I have this yearning desire and want to draw greater attention to this event by holding an art exhibition called: ‘World Homeless Day – Slice of Humanity’ at the Incubator Creative Hub October 10-16,” says Tania. 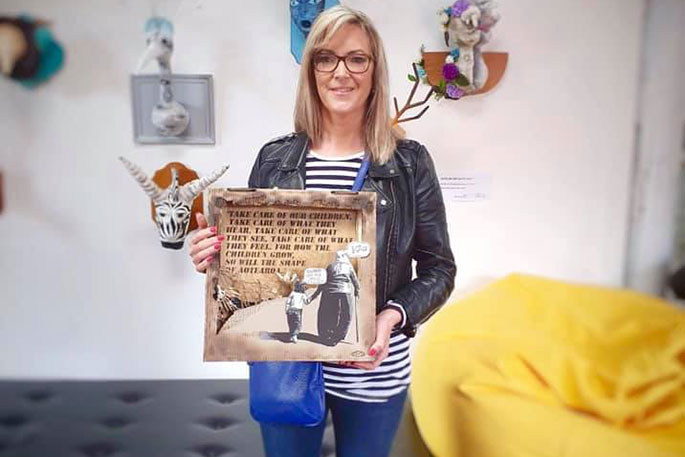 The team at The Incubator Creative Hub have helped with supporting this exhibition at The People’s Gallery.

“Simone Anderson and her team are amazing to work with,” says Tania. “They understand me as a creative, an artist and community supporter for those doing it tough. I was really excited when i approached them about this kaupapa, they instantly wanted to support it.”

Street Retreat invited all the candidates for the local body elections to come and paint their own pizza box for the upcoming exhibition.

“But, also for me, Tania is a friend, we are both creative practitioners, and last year we were talking through some concepts about how to raise awareness using the medium of art for world homeless day.”

At the time Pare was working at the Tauranga Art Gallery, and Tania did an installation at one of the bus shelters outside the gallery.

“This is an opportunity for community to take action, stand with us and let’s utilise the visual arts as a platform to bring positive change and draw attention to the needs of homeless people in our community,” says Pare.

“More than raising awareness with the exhibition this week, I would want to know what council are doing in that space to change things. What has actually changed since this time last year?”

Deputy Mayor Kelvin Clout says he’s been “very blessed” to be brought up in a good middle class home without the stresses and strains that a lot of people here go through.

“I don't have violence in my family and I was well looked after financially,” says Kelvin. “I haven’t experienced a lot of stuff. Coming and talking with the people that are here gives me a better understanding. The hard thing for someone like me, is how do I help, in a meaningful way?”

The art works are going to be sold although Tania says it’s not about selling or about the money.

“This world day event exhibition is an opportunity to make a significant difference in our community, to extend our manaakitanga and get involved, engage, connect, communicate, educate in responding to homelessness,” says Tania.

“There’s a lot of symbolism around using the pizza boxes,” says Pare. “I love this idea because there are multiple meanings. It's a throwaway disposable item for society but it’s also a vessel for food, something that people need in order to survive.”

“This is an opportunity for community to take action, stand with us and let’s utilise the visual arts as a platform to bring positive change and draw attention to the needs of homeless people in our community.” 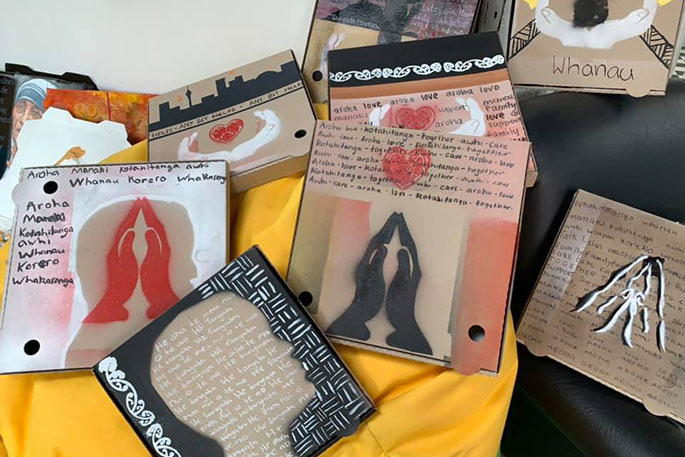 Pizza boxes can be painted, have writing, poetry, collage, photographs - anything goes as long as it carries a positive message.

“It is an opportunity for us to voice our support for our fellow community members, the mums, dads, individuals, youth, kuia and kaumatua elderly who are all experiencing homelessness,” says Tania. “There is one slice of humanity that community can connect with...and that is homelessness!”

Under the Stars will be helping with catering for the opening of the exhibition which will be held at 5.30pm on World Homeless Day, October 10 at The People’s Gallery, Tauranga Historic Village, 17th Ave.

The exhibition runs until October 16.