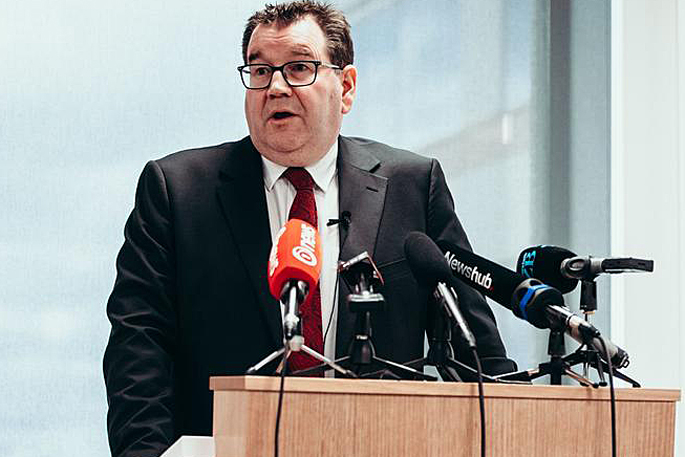 A tax windfall and one-off accounting gains have delivered the biggest budget surplus in a decade - more than double forecasts.

The surplus for the year ended June was $7.5 billion, up $2b on the previous year, and a May budget forecast of $3.5b.

The tax take was more than $6b above expectations at $86.5b, with increases in company, goods and services, and income tax driven by population growth and more people being in work.

"The surplus and low levels of debt show the economy is in good shape. This allows the government to spend more on infrastructure and make record investments in health and education," Finance Minister Grant Robertson says.

Government spending was up about $6.5b, which was due to large pay settlements in the health sector, settling historic holiday pay claims, and increased support for low income families.

However, the surplus was also boosted by a change to the valuation of the rail network, which gave a one-off gain $2.6b.

Net debt was better than expected at 19.2 percent of GDP, below the government's self-imposed target.

The government's broader financial position, including the performance of crown entities such as ACC and the Superannuation Fund, was a deficit of $2.3b which reflected the impact of the steep fall in interest rates.

Delivering surpluses, the level of government spending and net debt targets are among the Budget Responsibility Rules the Labour Party set for itself before last year's general election.

Grant Robertson says the accounts showed economic fundamentals were strong and the country was outperforming much larger developed economies.

"It is important that we don't talk ourselves into a downturn just because it suits some people's negative narrative... The economy (has) a solid platform to keep growing and face any global headwinds."

Recent surveys have put business confidence at its lowest level in a decade.

The Reserve Bank has cut interest rates to a record low 1 percent to give the economy a shot in the arm, but has given broad hints that it would like to see more spending by the government to lift activity and demand.

"Fiscal policy has a part to play alongside monetary policy as we manage these challenging global economic conditions."

"I'm not seeing any evidence New Zealand is moving to a recession," he says.

Mr Robertson refused to be drawn on whether tax cuts might be on the agenda next year, but says the government was not doing any work on a suggestion by the International Monetary Fund that a cut in the GST rate would offer stimulus.

The May budget for the current year has forecast a surplus of $1.3b.

BNZ senior economist Craig Ebert says the one-off accounting gains, which boosted the bottom line, probably flattered the final numbers, although he said there was no disputing the strength of government finances and the position it put it in to face headwinds.

"It's certainly a very strong starting point particularly if you look at the international context."

However, Mr Ebert says the issue was whether the strength of the tax take and economic growth would match Treasury's optimistic forecasts in the last budget.

The budget was forecasting growth approaching 3 percent a year but most economists doubt it will get much above 2 percent.

Mr Ebert says the books showed the government's social and infrastructure spending early in its term was flowing through, but the question was whether it could be maintained.