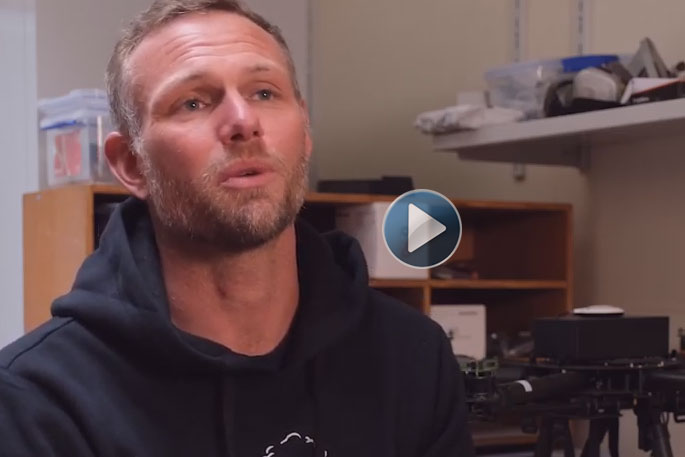 The drones were developed with funding awarded to Ian by EQC’s Biennial Grant in 2018, and tested on White Island.

Drone technology developed at the Victoria University of Wellington has helped improve understanding of one of the most active volcanoes in the world.

Volcanologist Dr Ian Schipper has just returned from an expedition with a group of international scientists where his modified drones were used to analyse volcanic gases from the plume of Papua New Guinea’s remote and unstable Bagana volcano.

The drones are mounted with instruments and hardened to cope with toxic gases, which means that they can survive closer approaches to volcanic craters than ever before, and are able to capture air samples, and measure the flux of gases before they are dispersed in the wider atmosphere.

The drones were developed with funding awarded to Ian by EQC’s Biennial Grant in 2018, and tested on White Island.

EQC’s Dr Jo Horrocks, a volcanologist herself, says it’s great to see Ian using his technology to contribute to research internationally as well as at home.

“One of EQC’s main roles is to fund research on natural hazard risks, and technology like this lets us understand more about our volcanic risk,” she says.

The team from Deep Carbon Observatory, led by Brendan McCormick-Kilbride from University of Manchester, already had a drone fitted with different instruments to collect information from inside the gas plume coming out of Bagana volcano.

Ian was asked to join the team because his drones were highly portable and able to be operated in isolated terrain while being robust enough to work in a harsh environment.

“Collaboration is essential when you’re tackling a difficult volcano like Bagana,” says Ian.

“The instruments on my drones were the perfect complement to the technology used by my colleagues from Bristol, Cambridge and Sheffield.”

“I could operate the drones myself and carry them in my backpack to the village of Wakovi where we stayed.

“My drones are highly agile, light, easily modifiable and actually all of the components can be replaced on site.”

It wasn’t a quick trip for the team to get near the volcano. It took three flights, a boat ride and two days walking to get to the village of Wakovi where they based themselves.

But Ian didn’t wait to get to Wakovi before testing the drones – able to measure the gases from the boat itself.

“From satellite observation, we expected Bagana to be one of the top ten gas emitters in the world.

"What the team actually found was that instead of the thousands of tonnes per day of sulphur dioxide they anticipated, Bagana was emitting much less while they were there."

Ian took a daily one hour trek to get his drones close enough to fly into the plume, waiting to fly them during the breaks in the near constant rain.

Surprised at the results, the team were glad to have the second set of data collected using Ian’s drones to confirm their findings – that Bagana is much quieter than they thought. Although, he says that “There’s no telling whether it will stay that way.”

Ian says the expedition to Papua New Guinea was a great way to test, and refine his technology in a difficult environment.

“One of most important lessons for me has been that each volcano presents a very unique challenge. We couldn’t get so close to Bagana because of its instability, so the distance and speed the drones had to achieve was the most challenging.”

His next trip to New Zealand’s most active volcano, White Island, will present different challenges for his hardy drones.

“Because White Island is comparatively easier to access, we’ll be aiming to get the drones as close to the crater as possible to get more concentrated samples."

Ian isn’t quite finished developing all the tools he needs. He will use the last of his EQC funding to complete his suite of drone-mounted instruments.

The final device he will adapt will help him to profile the highly reactive and toxic aerosols present in the plume above White Island.

“We know that there are a huge array of elements present as aerosols in the plume, but they’re difficult to capture as they’re only there in trace amounts."

Jo says, “The volcano pumps out some really toxic gases, so it would be fantastic to understand exactly what those are so we can understand more about a potential eruption at White Island.”