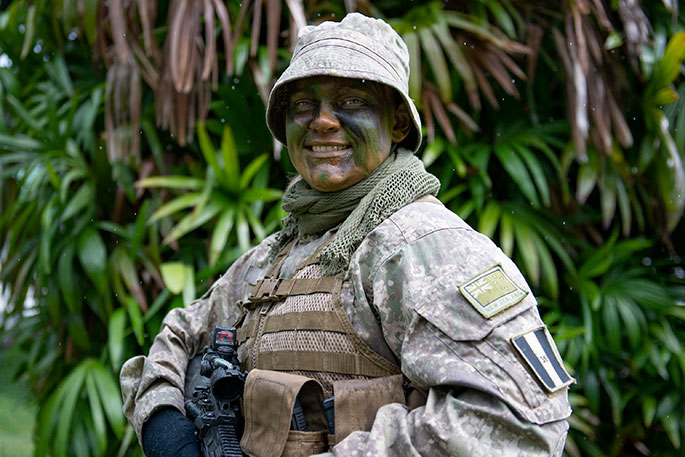 Tauranga NCEA tutor Karina Sandison has swapped the classroom for the jungles of Malaysia for the next few weeks as she takes part in a large multinational military exercise.

Private Sandison is one of more than 50 New Zealand Army Reservists from all over the country taking part in Exercise Bersama Lima, a military exercise held each year involving forces from New Zealand, Singapore, Malaysia, Australia and the United Kingdom.

These countries signed the Five Power Defence Arrangement in 1971 as a commitment to defence co-operation and regional stability in South East Asia.

Private Sandison, who attended Katikati College and is a solo mother to a 10-year-old son, began to look at military life after reaching a stage where she felt like she needed to be doing more.

“I turned things around health-wise for myself and my son and realised that I couldn’t sit behind a desk for the rest of my life.

“The fitter I got the more itchy my feet got, and I went away to join the full-time New Zealand Army, but unfortunately my son did not cope with my absence and my Mum had to call me home from training early.

“When I got home I went straight back to the Army Hall here in Tauranga and learnt all about being a Reservist. I marched out in January this year and have not looked back – it fits in perfectly right now while my son is young, because the Reserves are all about family first.”

She has never regretted that decision to sign up.

“I think the biggest thing for me has been the opportunity to show people that anyone can do it,” she says.

“Only two years ago, when I made the decision to apply for the Army, I was almost 100 kilograms. I put my head down, sorted my diet, and got training, and when I marched out of Basic Training at 30 years old, a single mum, I had lost 30kg.

“And now here I am. In just eight months I have already done so much. In one exercise we covered 30 kilometres over 32 hours with no sleep, and in another exercise, on Rangitoto Island, we covered more than 50 kilometres over about the same time while learning leadership skills under fatigue and sleep deprivation.”

Private Sandison says the skills, friendships, and opportunities she had gained as a Reservist were beyond anything she could have imagined.

“It is just so satisfying. I am able to integrate the skills learnt in both my personal and professional life – it really is priceless.

“On top of all of that I am in Malaysia, a once-in-a lifetime opportunity, during which I will be able to work extensively on my soldier skills.

“I am extremely excited. I couldn’t wait to get here and start learning.”

When Private Sandison returns from Malaysia she will start a new role, as a tutor for 16- to 19-year-olds at the Advance Training Centre Military Prep School in Hamilton.

Exercise Bersama Lima, from 29 September to 19 October, is usually based in Singapore and takes place in the South China Sea and around the Malaysian Peninsular.

Members of the New Zealand Army Reserve regularly work and train alongside their Regular Force counterparts in New Zealand and overseas.

Their military training also strengthens the leadership, resilience, teamwork and focus they bring to their civilian roles – benefitting their employers and their communities.