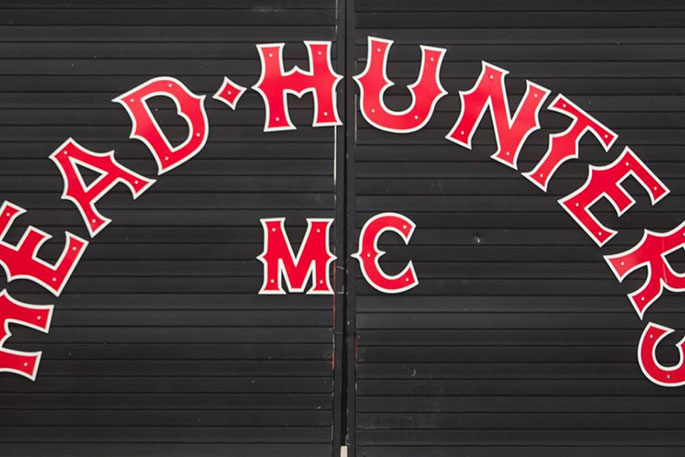 A Head Hunters gang member lodged a caveat on a Tokoroa property after his contract was breached by local iwi and the local council. Photo: Stuff.

A gang member's attempt to thwart a local council selling a property in Tokoroa has failed its first hurdle but further action is looming.

A caveat lodged against a property owned by South Waikato District Council has been lifted after a hearing at the High Court in Rotorua.

Ford Moeke's lawyer, Kj Patterson, says the legal battle isn't over and has drawn parallels with the gang member's case and that of Māori land confiscations by the Crown.

In April this year, Moeke lodged a caveat against the Dumfries Road property in Tokoroa, a property he was set to buy from Raukawa Iwi Development Ltd with settlement set down for December 7 2018.

Legally, Raukawa were not able to back out of the sale but after learning of Moeke's gang ties on the day the settlement was supposed to go through, South Waikato District Council stepped in and purchased the property for $230,000 "in the interest of public safety".

At the time, South Waikato Mayor Jenny Shattock said there was no way the council was going to let the gang take a stronghold in the town and that support for the council's purchase had been overwhelming.

In May, Moeke commenced proceedings against Raukawa and South Waikato District Council.

He is seeking damages for breach of contract from the former and has accused both entities of conspiracy to defraud. The case is set down for November.

The council then attempted to sell the property but Moeke lodged a caveat, effectively tying its hands.

The council took the matter to the Rotorua High Court to have the caveat lifted after a hearing was held between the two parties in August.

In her written decision, Associate Judge Hannah Sargisson lifted the caveat because Moeke had cancelled the sale and purchase agreement after the deal fell through.

It’s common practice during the process of purchasing a property that a buyer, before a certain point, can notify the seller that they do not want to proceed which ensures the buyer is not obligated to follow through with the purchase.

However, in this case Moeke intended to purchase the property and on settlement date Raukawa breached the contract and sold the property to the council.

Once the deal had fallen through, Moeke's lawyer sent a notification to cancel which absolved Moeke of any liability.

In her decision, Sargisson said that had the contract been affirmed rather than cancelled, Raukawa would have been liable for its obligations under the contract and it would have been possible for the court to give Moeke the right to purchase the land despite the fact the iwi no longer owned.

Moeke's lawyer denied claims Moeke was going to use the property for gang purposes, despite his client's postings on Instagram indicating that it would be.

Patterson said the case set a dangerous precedent that could see more alleged "fraudulent" behaviour of this kind replicated across New Zealand.

He drew parallels between Moeke's case and the confiscation of Māori land by the Crown, in particular Ihumātao.

"It's a land grab you could say at one point," he says. "They've just stolen it, he had a contract to buy it and they've just come in and stole it.

"Do you see any parallels with that and anything else that has happened in New Zealand in the last 150 years? You know where a Government department comes in and whips land out."

Stuff understands that councillors had been told that comments regarding the issue could only be made by the mayor.

However, one councillor who did not want to be named, says Patterson's views on the issues are wrong.

"Council were acting in the community's best interest at all times," the councillor says.

"Given the proposed gang headquarters is 100 meters from a local primary school and the Tokoroa Cemetery the council needed to preserve the neighbourhood and address issues of community safety."

Moeke, Raukawa and South Waikato District Council are due to appear before the Rotorua High Court on November 7.