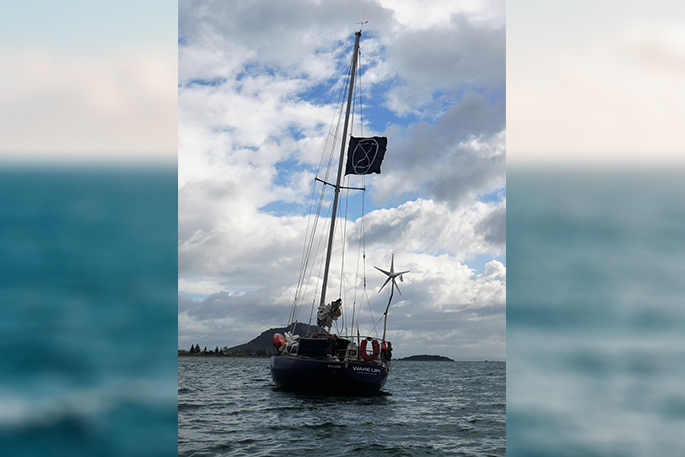 The yacht 'Wake Up'. Photo: Supplied

Update: The voyage to Wellington by the Extinction Rebellion Tauranga group ended in Gisborne.

"Some of the XR crew have reached Wellington hitch hiking. David stayed in Gisborne for the big waka event," says a spokesperson for Extinction Rebellion Tauranga.

"Aweeeeee, we didn't make it to Wellington as planned," writes David. "After making great progress for the first two and a half days of our trip we had to make a call and abort the mission.

"The forestay on 'Wake up!' collapsed due to mistakes done by crew and skipper. I was not on shift that Monday so I had to rush on deck without pants on to safe the jib sail and further damage on the boat.

"We had to turn on the engine and head for Gisborne while letting it sink in that we have to abort the mission for the safety of the crew and boat. It was funny after all making the most of it.

"We sheltered in Tairawhiti for three nights and Marcus and Jasmine decided to continue their mission on land while I fix the boat and sail back to Tauranga with fresh crew and enthusiasm."

Wellington ahoy! Tauranga activists from Extinction Rebellion Tauranga have sailed down the coast this week aboard the yacht ‘Wake Up’ to join in with a national week of action at the nation’s capital.

Local yachtsman David Zenco was determined to travel to Wellington to attend the global climate protest in a carbon neutral way. However, as New Zealand has no fossil fuel-free public transport options, he was forced to take his boat.

David, the skipper and owner of a 30-foot sloop named "Wake Up", is a marine biologist, teacher and environmental activist and has been joined by two ‘rebel’ friends, Jasmine Black, a local mother of two and Marcus Carambola, musician and teacher.

“I am very excited about the week of action coming up and I have decided to take on the mission of sailing to Wellington from Tauranga,” says David. “We will be driving the 30ft sloop-rigged yacht ‘Wake up!’ that has been my home and shared nature-reconnection project for the last 19 months.” 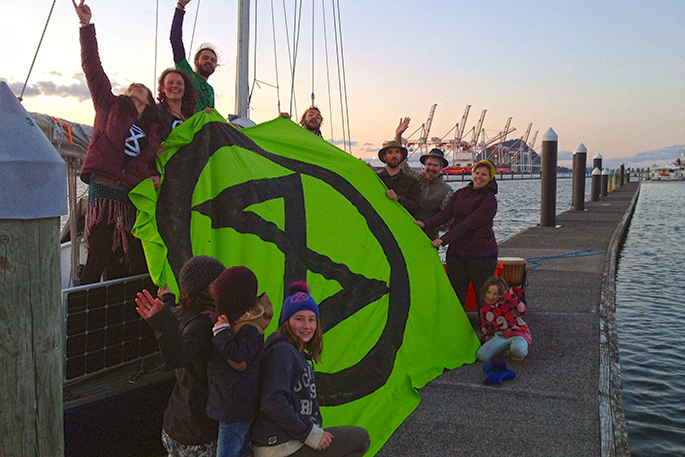 His intrepid crew departed last weekend on September 28 from Tauranga. They were seen off by their whanau and other ‘rebels’ as they sailed off into the sunset and fairly severe winds. Their voyage has taken about five days, landing them in Wellington to join the Global Rebellion which starts on October 7.

"It's incredible to think that in the middle of ecological breakdown it's cheaper for people to travel by plane to the capital than to take public transport,” says David.

"It's time to wake up and draw the line on climate crime and climate criminals. We feel we need to rebel for life to urge our government to tell the truth about the climate and ecological emergency we find ourselves in - and start acting accordingly."

David has painted two huge flags with the Extinction Rebellion symbol that he hopes will be on full display as he sails into the harbour to join the hundreds of rebels already there.

They will be converging on Te Whanganui-a-Tara / Wellington from all around the country to kick off
the Global Rebellion starting on October 7.

On Saturday October 5 and Sunday October 6, non-violent direct action training days have been planned. The main action day is Monday October 7 and the event finishes on October 10. The five days coincide with the global rebellion events taking place.

The Wellington organisers are expecting that some participants may get arrested during the five days of activities.

“This is a rebellion, so there will be arrests,” wrote the organisers on the Facebook page. “Do spend some time reflecting on if you would like to be arrested. However, we will have clearly designated areas for people who want to hit the streets, but not be arrested. There are also lots of caring roles that need to be fulfilled. We need you all down here for this.  Extinction Rebellion is always non-violent.”

“Our capital will be the first of over 60 cities around the world that will be disrupted with non-violent
civil disobedience,” says David.

David hopes to inspire more people to take alternative means of transport, not just when attending protests, but in their everyday life, if possible. He envisions that one day more yachties will join him to form a flotilla to sail to protests around the country. 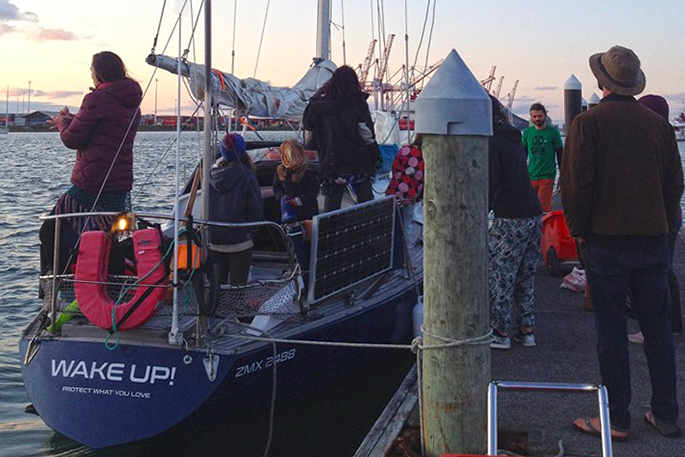 The crew getting ready to sail from Tauranga

What does this guy think his boat is made off? If climate change is as bad as the "experts" say why will banks still provide mortgages for a house anywhere near the sea? Because they know it is a hoax.

On the bandwagon, looking for their 15 minutes ..... What size was the carbon footprint making the boat, replacing the sails, what damage to nature antifouling the hull, and what fuel does he use to power the boat when there is no wind. What does he do with human and other waste while they are sailing? For that matter what does he do with it while he lives aboard his boat? What was his footprint when he worked to earn the money to BUY the boat ? How will he dispose of it when it is no longer serviceable. He could have easily hitchhiked with a sign that he only rides in in electric cars !! EXCEPT that their lifetime carbon footprint is LARGER than two petrol cars. Extinction Rebellion Go away , silly children ,therearemuchmoreimportantthingsathand....likeRWC2019