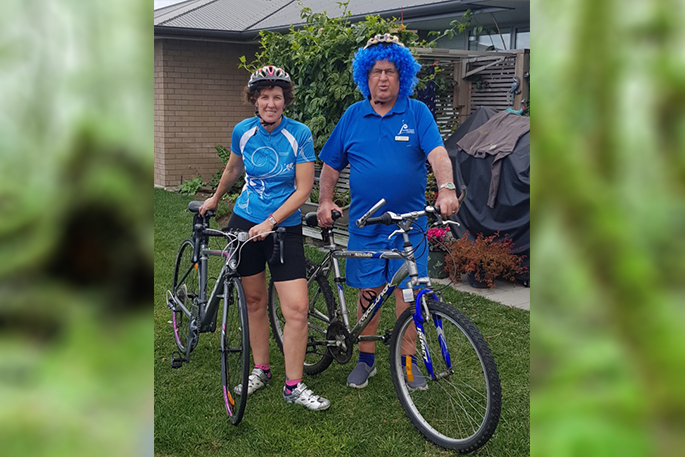 When specialists told Tauranga man Tony Dodunski he should go home and prepare for the worst he never dreamed he would be riding in a four-hour endurance cycling race a year later with his children.

What makes Tony’s story even more amazing is he was also diagnosed with terminal prostate cancer eight years ago and survived.

However, in October last year doctors gave him little to no chance of surviving.

But he did and today he is better than ever and in training for Pedal4Prostate, an annual cycling event that raises funds for the Prostate Cancer Foundation of New Zealand and increases awareness of the disease.

“I don’t know why I’m still here and my doctors haven’t been able to give me any answers, maybe I’m just lucky,” says Tony.

From being wheelchair bound to finding a new ability to exercise and live life without the amount of pain he became used to, Tony is riding alongside his son and daughter in the race at Hampton Downs Motorsport Park next month.

Having only discovered he had prostate cancer by chance during a hernia operation in 2009, Tony is passionate about raising awareness of the disease and encouraging men to get regular checks.

“Men don’t like talking about it. Whether that’s because of embarrassment or thinking that they’re bulletproof, I want men to understand that it is their right, even at 40 years of age, to get checked for prostate cancer,” he says.

Tony hopes that through events like Pedal4Prostate and stories like his, that men will understand the importance of taking their health seriously.

Tony’s daughter, Leanne Day is competing in Pedal4Prostate for the second year as a way of supporting and honouring her father and his journey. Her brother Rodney will also be riding.

“The last seven years have been a gruelling time with some incredible lows. Not knowing if Dad was going to be alive in a week, or next month has been so tough for our family,” says Leanne.

The family hope that through sharing their story and their participation in Pedal4Prostate, men will be encouraged to forget the stigma around prostate checks and realise that early detection is the key to survival.

“All proceeds from the event go towards increasing awareness and funding research into one of the country’s most prolific cancers that kills over 600 New Zealand men each year,” says Prostate Cancer Foundation CEO, Graeme Woodside.