Cold front forecast for the weekend 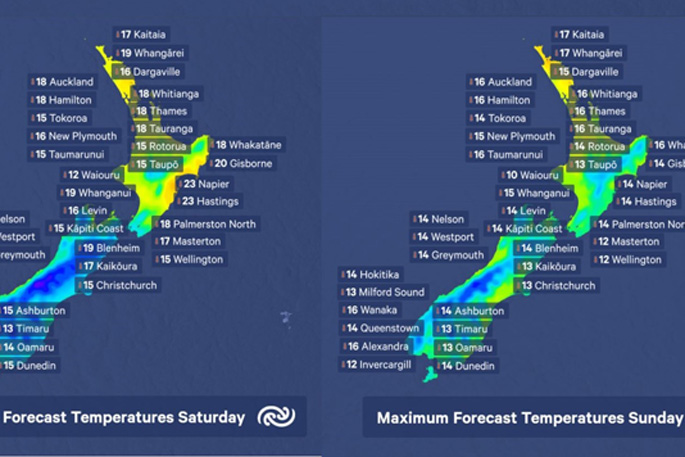 Temperatures for this weekend. Image: MetService.

MetService is forecasting that a cold front will move up the country over the weekend, with more changeable Spring weather expected for the second week of the school holidays.

“Low temperatures and a few showers are all that remains following yesterday’s strong southerly change which moved over New Zealand and brought blustery winds and thunderstorms with hail to many regions,” says MetService Meteorologist April Clark.

“As southerlies gradually turn northwest on Friday, daytime temperatures are looking to rise but only for a short time for some areas.”

While Friday will be dry and fine for most, a cold front that moves over the lower South Island at night will be a warning to the rest of the country of what is in store for the weekend.

The front is expected to bring strong winds and a brief period of rain to southern and central New Zealand on Saturday as it moves northwards. Another dose of late season snow is likely for the higher passes and ski fields.

“Temperatures remain mild about eastern coasts ahead of the front, with Napier forecast to hit 23C on Saturday before the southerly change on Sunday drops the forecast high to 14C.

The front is expected to weaken as it moves over the upper North Island early Sunday, bringing a few showers. The South Island and lower North Island are looking to have a generally fine, and chilly start to Sunday,” says April.

Looking to next week, the changeable weather continues so those making outdoor plans for the final week of the school holidays, should keep an eye on the forecast to find their fine weather window.