Universities to uphold freedoms not discrimination 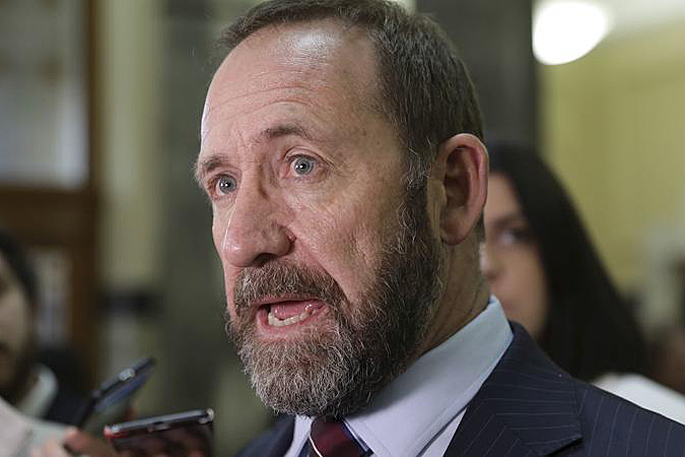 The Justice Minister says universities are in a difficult position, as stickers promoting a white supremacist group appear on campuses across the country.

The material promoting the recently-launched group has been seen at the University of Auckland and has now been spotted at at least two other campuses.

Auckland University has been criticised for refusing to rid its campus of the material, saying it's protected by freedom of speech.

Andrew Little said it was a difficult situation, as these institutions had a responsibility to uphold academic freedom.

"Some of these things that are appearing, are they genuinely expressions of academic, intellectual and ideological views that are properly the subject of public debate, or are they expressions that are intended to be discriminatory and demeaning and delegitimising?

"There's no principle of academic freedom that says that ought to be protected."

There was a difference between the debate over having "controversial" speakers on campus, Mr Little said, and a set of stickers and posters that were trying to "diminish the status of other people".

If history tells us anything, some of the most violent expressions of political ideology started with what looked like harmless beliefs, Mr Little said.

"The question we ought to ask ourselves is at what point do you say this goes beyond and idea that we should tolerate, to something the ultimate expression of which is acts of violence against individuals and communities."

It is a difficult line to draw between expressions that are discriminatory and those that express an idea, even if it is unpopular, Mr Little said.

"The reason why I have asked the Ministry of Justice and the Human Rights Commission to have a look at the laws that deal with what we characterise as hate speech is precisely because that one is a difficult one to draw and there is a question about whether our existing laws, particularly in relation to inciting harmony on those discriminatory grounds, is adequate."

In March, Mr Little indicated he was fast-tracking a law review, which could see hate crimes made a new legal offence.

He expected to report back with some options to consider by the end of the year.

Amen. I agree 100%. It is all too easy, on a wave of emotional "Political Correctness" to wash away fundamental freedoms that have been hard earned over centuries. In a healthy Democracy, we SHOULD be able to determine for ourselves what we will embrace and what we will reject. We don’t need Nanny to suppress what is unpopular. I believe this is the most important issue that has been discussed on Sun Live. It is enshrined in the Kiwi concept of a "fair go" and I hope we never lose it. Yes, there is a lot of hatred and nastiness in the world but you deal with it, and that is not accomplished by suppressing (ignoring) it.

Section 14 of the New Zealand Bill of Rights states: "Freedom of expression Everyone has the right to freedom of expression, including the freedom to seek, receive, and impart information and opinions of any kind in any form." Everyone can, and should, ignore anything that they find objectionable or not aligned with their personal values. Limiting freedom of expression can become a slippery slope toward government censorship which is something that NZ criticises when done by other countries.

The duty of a University...

...is to help people learn to THINK. The right to Free Speech is inalienable and sacred. It has been bought with blood across centuries. You should be able to read ANY kind of message and decide for yourself whether you embrace it or discard it. Personally, I vehemently reject hate speech, but I don’t want it banned. Each of us has the right to decide for ourselves what we agree with or don’t. "I may not agree with what you say, but I shall defend unto death, your right to say it."