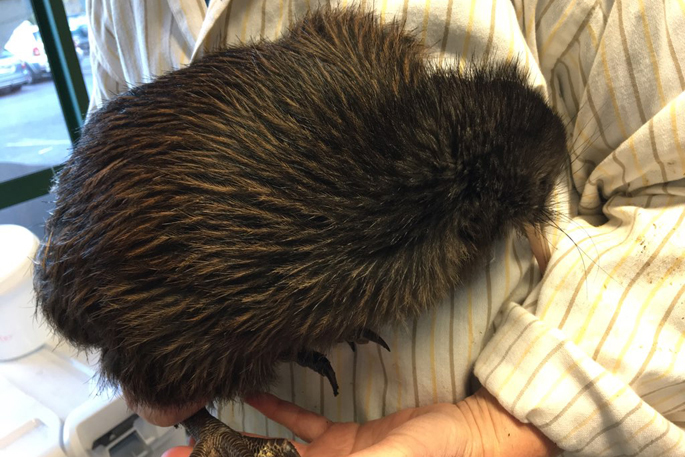 A new ‘kiwi hospital’ at the National Kiwi Hatchery Aotearoa has been officially launched to start off Save Kiwi Month.

The rehabilitation facility, donated by Mercury, is part of the hatchery at Rainbow Springs in Rotorua, providing a dedicated space for sick or injured kiwi to recuperate or for any Operation Nest Egg chicks that have hatched in the wild.

Rainbow Springs Kiwi Hatchery Manager Emma Bean says the hospital has already discharged its first patient – a kiwi that was found on the side of the road in Whakatane, looking dazed.

The kiwi was named Komanawa – meaning spring of water – as he was found near a spring. He first went to a veterinarian in Whakatane for treatment before being taken to the National Kiwi Hatchery for rehabilitation.

“Komanawa had some light grazes and small bruises, and he was very lucky he didn’t have any broken bones. We had to hand-feed him twice a day while he was here, because he didn’t think much of our cooking,” says Emma.

“After two weeks of rest, Komanawa was released near to where he was found, a little heavier and a lot healthier.”

The National Kiwi Hatchery is hosted by Rainbow Springs, which is one of the 14 businesses owned by Ngai Tahu Tourism.

“The kiwi is our national icon and a precious taonga for us to protect for generations to come. This is one of many heart-warming stories to come out of our team’s mahi at Rainbow Springs in Rotorua, and we are thankful for the support offered by Mercury to make this kiwi hospital a reality,” says Lisa.

There are nine brooder boxes in the Portacom, which is double the capacity that the hatchery had previously.

“We are so grateful to Mercury for providing a fantastic facility so that we can care for kiwi like Komanawa,” says Emma.

“Before we had this facility, we were using a repurposed concrete water tank to isolate sick or injured kiwi from our other healthy chicks on site.”

Mercury’s releationship with the hatchery started when it sponsored the installation of a solar electricity package to ensure a back-up energy supply to the incubators housing the kiwi eggs. From there, the provider sponsored the hospital to ensure injured and sick kiwi had the best chance of surviving.

Mercury head of mass market segments Mohammed Abbas says fighting for kiwi is everyone’s responsibility and it is a privilege to help achieve better outcomes.

“Caring for them, breeding them and raising them is an incredibly specialised job and one we’re in awe of. By supporting the hatchery, Mercury can help reverse some alarming statistics facing kiwi,” says Mohammed.

“We want to inspire New Zealanders to enjoy energy in more wonderful ways – and what’s more wonderful than ensuring the survival of our beloved national icon?”

The kiwi hospital is separate to the hatchery’s incubation and brooder rooms that people can view if they purchase a National Kiwi Hatchery tour while visiting Rainbow Springs.

Visitors are not able to view the hospital facility – but are able to donate to help sick or injured kiwi via the hatchery.

An event to celebrate the kiwi hospital and the start of Save Kiwi Month was held on October 1, which is also when kiwi hatching season ramps up.