Snow falling on the Desert Road 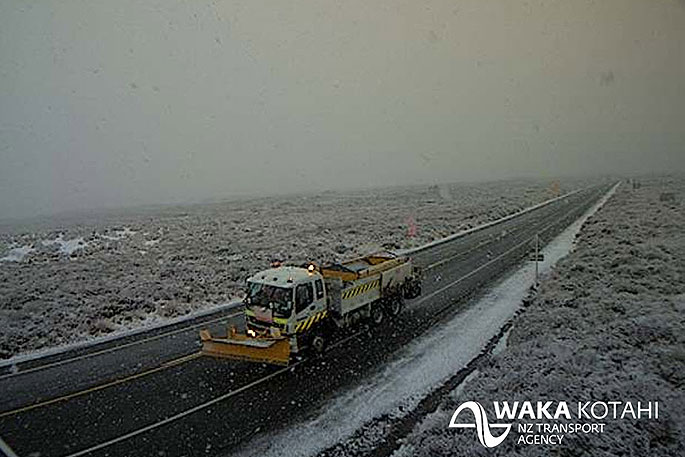 A road snowfall warning is currently in place for the Desert Road.

The MetService issued the warning yesterday and says while snow shower have cleared, another period of snow is expected tonight.

“Another period of snow is expected from Wednesday evening through to Thursday morning.

“Between 6pm Wednesday to 6am Thursday, 2 to 4cm of snow may settle on the road near the summit, with lesser amounts down to 700 metres.”

The NZTA is asking people to continue to take extra care on all roads surrounding the Tongariro National Park area.

“Watch following distances and drive to the conditions.”

Meanwhile, a strong wind watch remains in place for the Coromandel, Bay of Plenty west of Papamoa, Waikato, Waitomo and Taranaki.

The MetService says the watch is valid for six hours from 3pm to 9pm on Wednesday.

“Southwest winds may approach severe gale in exposed places during this time.”

With further predictions of snow tonight, the MetService is expecting temperatures to drop to around four degrees tonight and tomorrow night.

The overnight lows are then expected to rise to about eight on Friday and Saturday.

There is also a mix mag of showers and fine weather throughout the week.

if it’s snowing in the sth island, the desert road will be closed