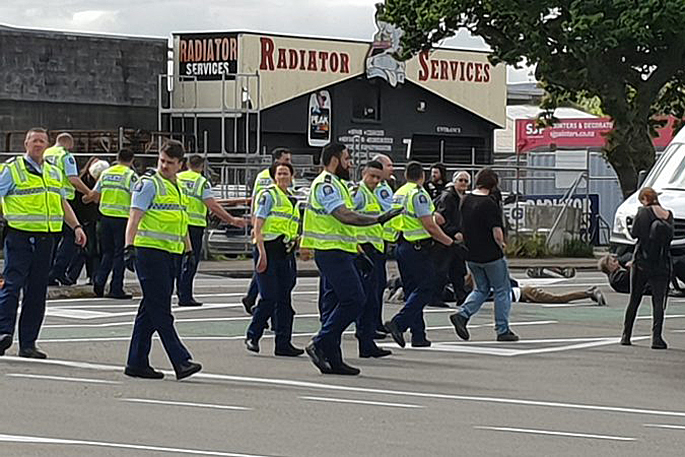 A controversial defence industry forum will not go ahead this year partly because of what organisers are calling aggressive protesters.

The Defence Industry Association's event has been the focus of demonstrations from groups who say it's a weapons expo.

The association chairperson, Andrew Ford, said the reasons for this year's cancellation includes wanting to protect delegates from aggressive protesters, the cost of the forum and the success they have had with smaller, more targeted forums.

Mr Ford said the association will attend the Avalon Airshow in Melbourne, and the Pacific 2019 International Maritime Exposition in Sydney, instead of hosting the forum.

Protest groups have said they are "thrilled" to learn the forum is not going ahead with what it calls a "weapons expo" a claim which the NZDIA has previously refuted.

In 2015, RNZ reported that weapons were on display at the event, which was sponsored by weapons manufacturer Lockheed Martin.

Auckland Peace Action group have regularly protested NZDIA events in the past.

The group's spokesperson, Valerie Morse, said Auckland Peace Action protested these events because they are directly opposed to the weapons trade.

"We think it is absolutely abhorrent that people profit from war and the mass murder of people."

She said she believed that the NZDIA had cancelled the event due to public pressure.

"In terms of the event here in New Zealand, I think, undoubtedly, the event is not being held because protests and public opposition has been so strong and so effective, that they no longer think a large scale gathering like this is is tenable.

"They have been doing this [event] for the past 20 years. So it isn't as if they all of a sudden decided that it was a bad idea. What happened was that actually the community has become educated about what is going on."

When asked about how Peace Action protests events, Ms Morse said it took an approach of non violence. She said she did not endorse the actions of the two people who assaulted police officers at a protest in Palmerston North last year.

However, she said that the police have a very low tolerance of what may be considered assault against them.

"In the course of a protest, many people will know that the charge of assault to police is a very low level charge that can often happen in terms of somebody just simply touching a police officer.

"I'm not aware of the specifics around those cases. But I think that they were very, very minor instances in the kind of the heat of the moment. And somebody might have inadvertently touched a police officer. So I think that's that's probably what happened."

Ms Morse said while it was a victory for the event not to go ahead, she believed more work needed to be done.

"Now I will be the first to admit that this is not the end of the military industrial complex. We have not defeated the war machine and the New Zealand government is spending more money than ever before, on the military and on buying new weapons."

… to ensure that our defence people have the best equipment to protect themselves and do their jobs. Nobody thinks War and killing people is a "good thing", but we have obligations to other countries who would help defend us in the event of an unthinkable attack. We couldn’t do it on our own and the National Anthem reflects this very succinctly. We have to honour our commitments and we can’t do it with muskets and pitchforks. Protesting it won’t change the underlying requirement for it.

Our Defence Forces ’gave in’ to protestors because they came across as aggressive . . . WHAT THE FLIP?