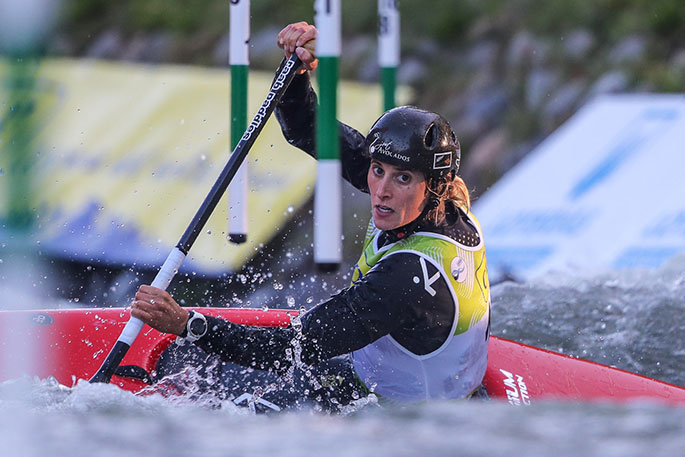 Luuka Jones had a superb semifinal run in the women's C1 to seal an Olympic spot at the canoe slalom world championships in Spain overnight. Photo by Balint Vekassy/ICF Media.

Luuka Jones and Jack Dangen sealed a double dose of Olympic selection success for the New Zealand kayak team on the final day of the canoe slalom world championships in Spain overnight.

Jones made her second final in as many days, eventually finishing ninth in the women's C1, as she added to her historic K1 bronze medal the previous day.

The 21-year-old Tauranga paddler picked up a touch in his 92.91sec run and eventually finished 31st overall. But with just 21 nations represented in the 40-boat semifinal, he only needed three other countries to finish behind him.

With K1 teammates Callum Gilbert and Finn Butcher - who both missed the semifinals - nervously watching on, China's Xin Quan and Poland's Michal Pasiut both missed gates and picked up 50sec penalties to leave Dangen on the cusp.

And when Belgium's Mathieu Doby hit three gates on his way to a 95.37sec run, a vastly relieved Dangen was able to celebrate.

"I was kind of nervous at the start line and maybe a bit shakier than normal - the run started off quite well but a couple of mistakes and that time just started getting away on me," says Dangen.

" The top guys were going super-fast and it ended up a real, real tight race but I was super-stoked when I grabbed that 18th spot and really happy with my performance to get into the semifinals at a world champs, when I've only made one world cup semifinal in the past." 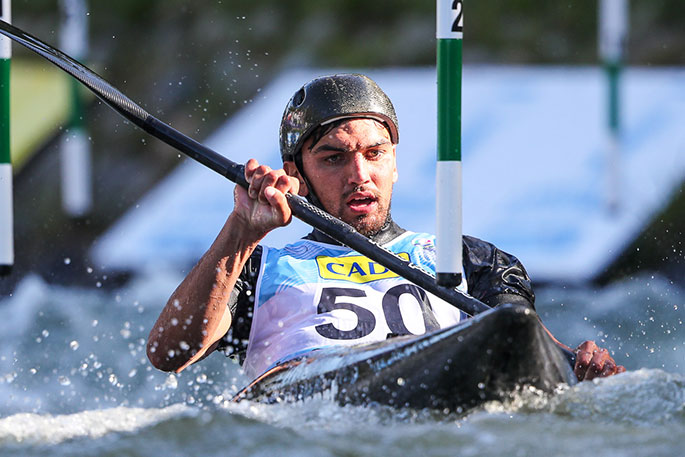 Jack Dangen on his way to securing an Olympic spot for New Zealand in the men's K1 at the canoe slalom world championships in Spain overnight. Photo by Balint Vekassy/ICF Media.

The result means that Dangen, Butcher and Gilbert - and possibly injured Rotorua paddler Zack Mutton - will duel it out over selection events at the Oceania Championships and the Australian Open early next year.

World championship results also count, giving Dangen a head-start on his rivals, although both Gilbert and Butcher have been far more consistent over recent seasons.

"This was the first Olympic selection race so it gives me some bonus points for getting the spot but with the likes of Finn and Callum paddling so well, it's going to be an exciting selection series."

The reigning Olympic K1 silver medalist again proved her place in the upper echelon of global paddlers over an incredible weekend, with personal-best world championship performances in both K1 and C1.

"The C1 semi for me was my run of the season - going into it, I probably didn't expect to make the final but just put it down and was so proud of that run," says Jones.

"Unfortunately I couldn't back it up in the final, which is a bit of a reflection of my inconsistency in C1 at the moment and showed I still have quite a lot of work to do in that boat. But qualifying for the Olympics in both C1 and K1, two finals and a bronze medal - not a bad weekend!"

German Andrea Herzog was assured of victory in the women’s C1 final when reigning world champion Jessica Fox picked up a two-second penalty for a gate touch in the final.

Herzog’s final margin over the Australian was 0.94 of a second, with Austria’s Nadine Weratschnig finishing third.

Czech Jiri Prskavec added the 2019 K1 world title to the crown he won in 2015, although the shock came further down where Great Britain’s Joe Clarke, the Rio 2016 Olympic gold medalist, was squeezed out of the British Olympic team by Bradley Forbes-Cryans, who finished one place and just 0.89 of a second ahead in the final.