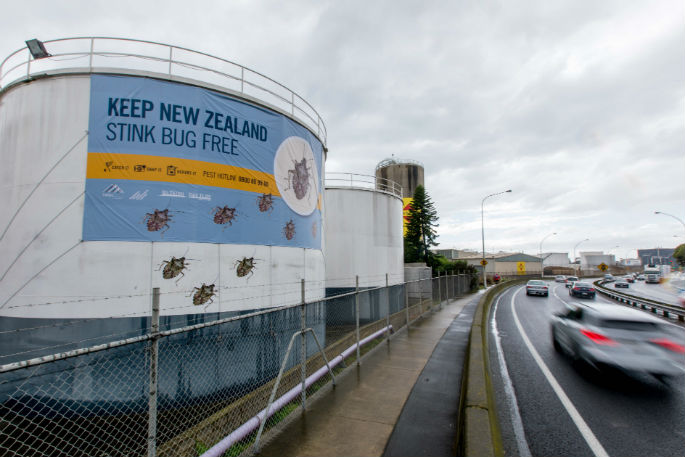 The Brown Marmorated Stink Bug is yet to invade New Zealand, but Bay of Plenty kiwifruit growers say it is only a matter of time before the pest settles in.

They fear a stink bug incursion will have devastating financial impacts on the region’s kiwifruit industry, and be a downright nuisance infesting people’s homes.

“The bug will have a huge impact on horticulture not only in the BOP but throughout New Zealand when it introduces itself and establishes,” says Katikati kiwifruit grower and Horticulture NZ president Barry O’Neill.

“I say ‘when’ because I find it impossible to believe that something that is coming so frequently to our border won’t find its way through and establish at some point.

“We have got a huge challenge ahead of us if we can keep NZ free of stink bugs forever.”

New Zealand kiwifruit growers could expect fruit loss of around 30 per cent on affected orchards.

A 2017 report from NZIER found that a BMSB incursion could result in total NZGDP falling by $3.6 billion by 2038.

Horticulture export values could fall by up to $3 billion over 10 years.

“It’s certainly on our minds. They are ferocious feeders, they have more than 200 host species they like to eat.”

He says the pest injures kiwifruit by sticking a feeding probe down into the fruit and injecting saliva into it. This then softens the fruit, allowing the bug to suck the contents out.

Damaged fruit will either drop off the vine before harvest, or from rot in trays post-harvest.

Stu believes the biosecurity threat could directly impact jobs of those working in horticulture.

“Damaged fruit lying on the ground is just lost income. If there is less fruit to pick, that is going to impact people working in this industry. It’s pretty massive.”

Barry also points out that like PSA, an incursion would cause great emotional stress for orchard owners.

“As an industry, we have to get our heads around if we still have a future. How do we grow in an industry if we are facing this horrible challenge?

“I’m sure we will be resilient and find a way through it, but it’s going to be tough.”

The stink bug has come from Asia and spread to the United States and 13 countries across Europe.

It is currently infesting kiwifruit orchards across rural Italy, resulting in a 30 to 40 per cent fruit drop.

Kiwifruit orchard owner and post-harvest operator James Trevelyan says you only have to look offshore to see the impact.

“I don’t see why it will be any different in New Zealand. It’s a well mapped out cause and effect of fruit drop.”

Biosecurity New Zealand describes the bug as a ‘sneaky pest’ that has been caught at the border many times hitchhiking on passengers and imported goods.

“They are hard to see, hard to kill, travel far and they breed fast."

Stu says these pests also cause real problems for people living in urban areas, burrowing away in the walls and ceilings of homes.

“In Europe, the bugs get into people’s housing during winter. There are just thousands of them, and if you disturb them they let off quite a nasty smell.”

James thinks the bug will push its way into urban spaces in New Zealand and people will need to start dealing with the 'foul-smelling' insect in their homes.

“I think urban NZ is going to be up for an awakening as biosecurity starts to affect their world more and more."

He says the next challenge is educating the public so they are well-informed on all biosecurity risks for this country.

Tauranga Moana Biosecurity Capital is calling on the community to watch out for the pests in order to help keep the region stink bug free.

It advises people to catch the bug, take a picture and report it to the biosecurity hotline immediately on: 0800 80 99 66.

For more information about the stink bug please visit: www.biosecurity.govt.nz