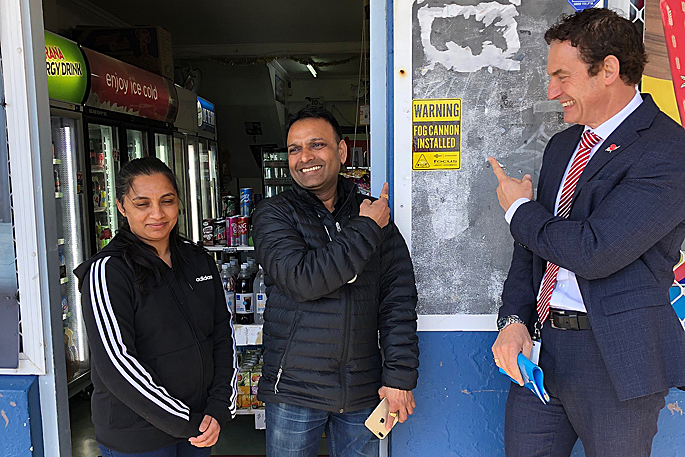 Five hundred small businesses have now benefitted from government-funded safety measures under a crime prevention initiative to reduce the risk of aggravated robberies in dairies, liquor stores and petrol stations.

Police Minister Stuart Nash has joined the owners of a superette in Titahi Bay near Wellington to mark the installation of the 500th fog cannon under the scheme.

A fog cannon emits a non-toxic cloud of vapour and a high-pitched noise to deter offenders and minimise the risk of violence to workers.

“Everyone deserves to feel safe in their place of work and this support has gone a long way to providing greater reassurance to owners of at-risk businesses,” Stuart says.

“Fog cannons are a significant deterrent to aggravated robberies because they create an effective no-go area for offenders. They are unable to see anything inside the shop and it also allows employees to retreat to a safe place away from the risk of attack.”

The first fog cannons were installed in late 2017 and there has been a marked reduction in aggravated robberies, financial loss, and injuries to shop workers, he says.

“Since April 2017 the number of commercial aggravated robberies has fallen by 40 per cent. Serious injuries have fallen by 41 per cent and more than 1100 offenders have been caught.”

“Fog cannons have been activated by workers in sixteen of these businesses and in all cases there were no injuries to staff and minimal property loss for business owners.”

Five hundred businesses now have fog cannons and a further 33 will be installed during 2019, the programme has cost $2.2 million.

“I am looking at ways to roll out the scheme to more businesses during 2020 and further details are expected soon,” Stuart says.

“The coalition government is also focussed on other ways to improve community safety and prevent crime. We are training extra Police, targeting organised crime such as gangs behind the methamphetamine trade, and tightening controls on firearms,” he says.

The earlier scheme required an up-front contribution of around $2,000 and shop owners could not afford to take part, he says.

Under the new scheme, business owners pay no more than $250 and fog cannons cost around $4,000.