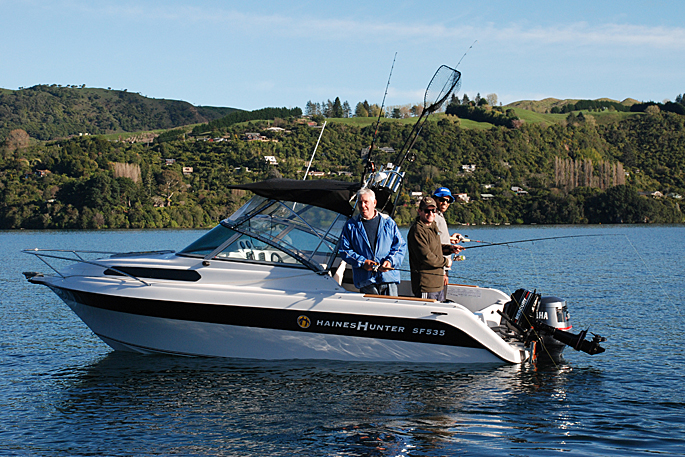 The first day in October is to a trout fisher perhaps the year’s most important day.

The opening of the new trout season is eagerly anticipated by thousands across the country, no more so than those that venture to the magnificent Rotorua lakes.

The new season means so much more than just the chance to catch a trout. It’s about returning to the great outdoors, catching up with old friends and families, reminiscing trips of the past and perhaps remembering old friends who are no longer with us.

Families are a big part of trout fishing too. The lakes, with their relatively calm waters and easy access to amenities are an ideal place to introduce youngsters to the joys of boating and the thrill of catching a feisty rainbow trout.

Fish and Game encourages family participation by making a special family licence available. Mum and dad or even grandparents can fish with up to four children or grandchildren on the same licence.

A traditional Scottish pipe band gets the whole affair off to a start the evening before at Lake Tarawera’s The Landing. This tradition goes back many decades as anglers congregate before the opening to catch-up with old mates for a chat, enjoy a quiet drink and to plan their cunning attack on the lake’s fish population bright and early the next morning. With concerns that the tradition might falter this year, members of the local Tarawera fishing community rallied behind the event to ensure it goes ahead.

Again this season, Fish and Game is making the Rotorua lakes an even bigger drawcard by offering a $10,000 plus tagged trout promotion to the mix. It’s free to enter, all anglers need to do is enter online and have a current fishing licence.

“It’s about inspiring people to get their licences and get out their fishing with the possibility of ending up with something extra special in the form of a winning fish,” says eastern fish and game manager Andy Garrick.

Thirty specially tagged trout will be released into lakes Rotoiti, Okataina and Tarawera just before opening day, each of which will be fitted with a uniquely numbered white coloured tag. One of these fish will carry a $10,000 prize.

In addition there will be an outboard motor up for grabs, and consolation prizes of tackle packages worth $200 each. Fish and Game is grateful to local businesses Telfer Marine, The Outdoorsman Headquarters and Kilwell for sponsoring these additional prizes.

Fish and Game officer Matt Osborne says all of the lakes have their special appeal and anglers all have their favourite spots however Tarawera tends to be the most popular at opening.

“Historically, Tarawera has drawn the most anglers as the lake provides good early season catch rates, it’s picturesque, has plenty of sheltered spots to fish and it’s a tradition for many.”

“Recent growing conditions have improved and the size of quality of the Tarawera trout should be better than it has been over the past few seasons. Lake Rotoiti always manages to produces some solid fish, and the largest trout over the opening is likely to come from there.”

Most trout caught at the opening will be two-year-old fish as they are the most abundant group of fish above the minimum size of 35cm.

Catch rates are often good early in the season following the three-month rest from boat fishing traffic and anglers are equally keen to get back out there.

Matt says environmental conditions have been favourable for trout growth.

“We expect that warmer water temperatures in the lakes over most of winter will have produced better-than-average winter trout growth, so our staff are looking forward to seeing the size of fish compared with last season.”

Eastern Fish and Game has offered a few tips on techniques to use on opening day. Fish and Game officer mark Sherburn says initially and before the sun gets on the water, the fishing is often slow but picks up during the first few hours of daylight.

“Shallow trolling with a ‘Tassie’ and a smelt fly is a successful way to begin. If it’s sunny and there’s lots of boat traffic, expect the fish to move a little deeper.

“Under these conditions adopt a deep trolling method such as a lead line, wire or downrigger. It’s hard to beat orange as a lure colour early in the season, or something with a touch of red and don’t forget to try the ‘old faithful’ black and gold toby!”

A little boat preparation is also urged before making it to the boat ramp on Tuesday morning too.

“It’s a good idea to do a service on your motor especially if it’s been left dormant over winter. Fresh fuel in the tank will help the motor tick along, you need to ensure your navigation lights are working if you plan to be out early or late, and check that your emergency equipment is up-to-date and in good order too,” says Mark.

Fish and Game say it’s timely to remind angles about concerning pest species. Catfish are present in lakes Rotoiti and Rotorua. We don’t want these to be getting into other lakes so all boaties need to be vigilant when it comes to moving between waterways. The old check, clean and dry is still a useful, practical way of minimising the risk of transferring pest plants and animals.