One family’s drive to educate 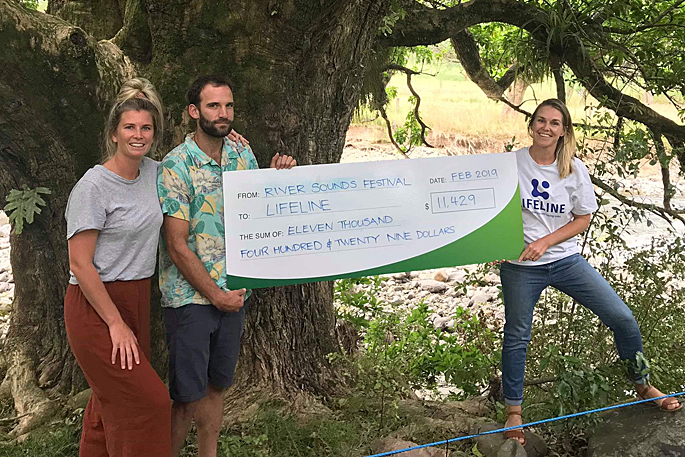 Sam Temperton, second from left, hands over the proceeds from the River Sounds Festival to Lifeline NZ.

It’s ostensibly an arts and culture evening, but people there will be discussing one of the great taboo topics of our time. It will also be an event tinged with sadness.

It’s called The Stayin’ Alive arts and culture evening and charity auction at the Tauranga Rowing Club on October 11. The name tells it all – helping people engage in the tricky conversations of mental health and finding strength in each other’s stories.

Sophie Temperton’s brother took his own life in 2009. “Talking about our mental health is the only way forward – to treat it and make it manageable for those suffering directly or indirectly,” says Sophie.

“People suffer in silence and we want to help normalise these conversations by putting on positive, engaging events that encourage communication and connection, and turn some of the pain into wellness.”

Sophie and the Katikati Temperton Family established the Everyone Hurts Foundation to help increase mental health awareness and support. The “Stayin’ Alive” event is the foundation’s second big event promoting the cause.

Sophie is alarmed by those numbers. “It’s not simply a product of not having enough support services, though we definitely don’t. Most people who take their lives are not in the system, as they haven’t reached out and asked for help.

“Friends and families don’t know they are having these struggles and so many of the signs leading to suicide go unnoticed. This is why we think encouraging people to talk, reducing the stigma and normalising these conversations about our mental health is so important. If we can encourage just one person to seek help, then the event is worthwhile.”

Sophie says art and creativity is a helpful form of self-expression for people with a mental health condition. It is also a way of getting these people out of the house and spending time with others, she says. So she would like the proceeds channeled back into Turning Points arts programme.

Stayin’ Alive will be hosted by comedian and mental health advocate Rhian Wood-Hill and local DJ duo M*A*S*H, food will be provided by No Biggie Food and the live auction will take centre-stage.