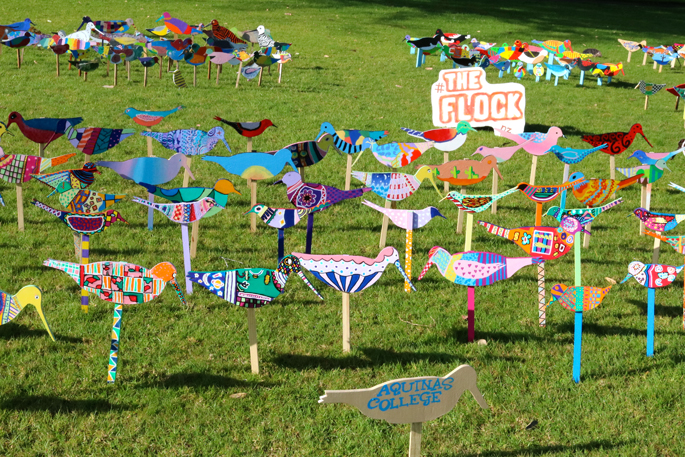 The wooden shorebirds have been painted by many all over the Bay of Plenty and are on display in Memorial Park. Image: Supplied.

More than 1000 students and parliamentary figures have turned wooden shorebirds into colourful art creations which are currently on display at Memorial Park.

Charitable trust Shorebirds organised the event as a fun and colourful way to draw the attention of the public to the little known fact that we have 1000s of shorebirds in the Tauranga Harbour and other parts of the Bay of Plenty.

Many of which are barely known and yet just as endangered and unique as many of the forest birds that seem to dominate the media and school curriculum, says educator from the Pukorokoro Miranda Shorebird Centre Alex Eagles-Tully.

“In short, the main objective of #TheFlock2019 is to create a fun way to educate people about our endangered shorebirds right on their doorstep, the threats causing their declining numbers and what they can do to help.”

The entire roll of Kaiaua and Kopuarahi Schools also painted birds which are on display.

“The public are invited to come down and admire the beautiful artwork and perhaps learn about the endangered cute but feisty little bird that is only found in New Zealand and is the only species to have a sideways bending beak.

“The Wrybill or Ngutuparore, or the amazing birds that spend eight months in NZ who are on their way back from Alaska where they just raised chicks. The Bartailed godwit or Kuaka and Pacific Golden Plover or Kuriri fly 11,500km over eight days and nights without eating, drinking or stopping to get back to Aotearoa.”

Members of the public are able to paint their own wooden shorebird for $5 with paints provided by Resene which they can take home to keep.

The largest Wrybill in the world is also visiting Memorial Park giving out stickers and asking people to vote for the Wrybill in the Bird of the Year competition in October and letting Kiwis know how unique these birds are.

The display at Memorial Park is available to view until Sunday September 22.