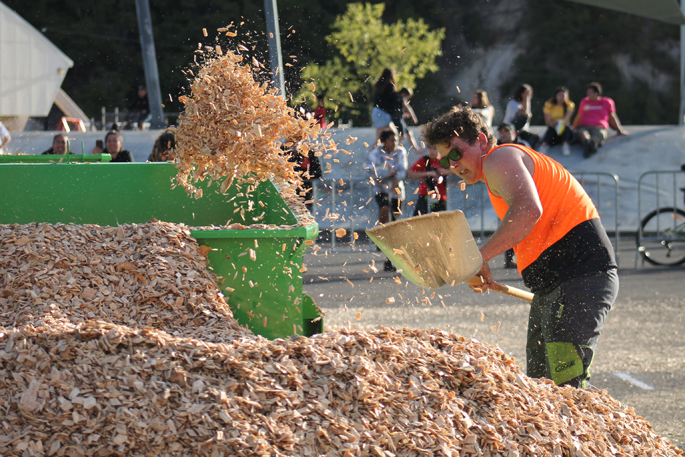 Chips are flying in the Big Dig competition in 2018. Image: Supplied.

Some towns try to hide their industrial origins when visitors come calling; they don’t recognise that those very origins can be used to draw people in.

Not Kawerau. In Kawerau, industry is celebrated.

That’s what Kawerau WoodFest and Generation Homes National Woodskills competition is all about.

The events, held every September alongside each other and this year schedulued for the weekend of September 28 and 29, are built on Kawerau’s forestry history.

The Generation Homes National Woodskills competition, New Zealand’s premier festival celebrating all things wood, started in 1989. This event kicks off with the prizegiving on Thursday September 26, and the exhibition is open to the public from Friday to Sunday September 27 to 29.

The Generation Homes National Woodskills competition moves to the Kawerau Town Hall in 2019 which makes for a new and central location for the event.

WoodFest followed in 2007 to add entertainment value and boost spectator numbers. It is now one of Kawerau’s iconic events, attracting more than 12,000 people last year, and gives the town a fantastic opportunity to promote itself and honour its history.

The Kaingaroa Forest, near Kawerau, is the southern hemisphere’s largest plantation forest. The Bay of Plenty is one of New Zealand’s main forestry regions, so it’s not surprising wood processing is Kawerau’s biggest industry. In fact, Kawerau processes some 13 per cent of New Zealand’s total forestry harvest.

All WoodFest activities are free to spectators, and they all celebrate Kawerau’s unique origins.

These activities include a BMX Freestyle show, the Hubbard Contracting FMX Pro show and wood-chopping and chainsaw pro-logging races.

There is the Ultimate Canines team of working dogs trained by Chelsea Marriner who is known as one of the country’s best dog trainers and has a record of trophies, including a gold medal form the 2012 IFCS World dog agility championships in the United Kingdom. Chelsea and her dogs perform several free shows over the course of WoodFest weekend.

Among the star-studded line-up for WoodFest is ex-Kawerau arborist Scott Forrest who has recently won his fourth world title at the International Tree Climbing Championships in Knoxville, Tennessee.

There is also a huge array of other local and national talent in the chainsaw carving arena. To enable true creativity to take place, the Wood Bugs Symposium which will be held in Prideaux Park this year, starts on Friday September 20 allowing the carvers 10 days to create their masterpiece.

A silent auction of the works will occur on Sunday September 29 at the conclusion of the WoodFest event.

Plus, there is the opportunity for Eastern Bay residents of all ages to get involved in some of the best ‘bragging rights’ events.

Entries are now open for the Dream Chaser Truck Pull which entails a tram of eight pulling a 16-tonne logging truck 40 metres along the road.

Kawerau District Council events co-ordinator and WoodFest director Amy Hayes says there is no better way to get involved in a community event than this.

“It’s a big ask but the people who compete each year know they have their work cut out for them and they do it anyway.”

In 2018, there was an all-women truck pulling team put forward by the Dream Chaser Foundation which is the chosen charity for this event. The truck pull winners in the 2018 WoodFest competition were Unique Gym.

For those who prefer something a little smaller to man-handle, although in volume it still offers a huge challenge is the Pacific Toyota Big Dig World Champs and Diddy Dig.

Amy says the annual ‘Big Dig’ team wood-chip shovelling events in the adults and children’s divisions are some of the most hotly contested she has seen. For the first time the Big Dig pits will be located outside the Kawerau Swimming Pool complex.

The Big Dig pits teams of four against each other, with each vying to be the first to shovel three cubic metres of locally produced wood chip into a giant ‘Foote’ bin.

Knock-out rounds lead to the ‘winner takes all challenge’ with prize money up for grabs. Kawerau-based Hubbards Contractors’ Big Dig team Hubbards Razorbacks hold the record number of title winning in 2015, 2016 and 2017.

In 2011, the Diddy Dig was introduced to give primary-aged children the opportunity to show that it’s not just the big people who can move chip in a hurry.

The Diddy Dig contestants have to move half a cubic metre of chip into a custom-made bin. Four teams compete at once, with the top two in each round, advancing to the winners’ semi-final and knockout competition.

In 2018, Putauaki School took the title and are already in training to defend it in 2019.

For more information and entry details for the events, visit www.kaweraunz.com/events/woodfest