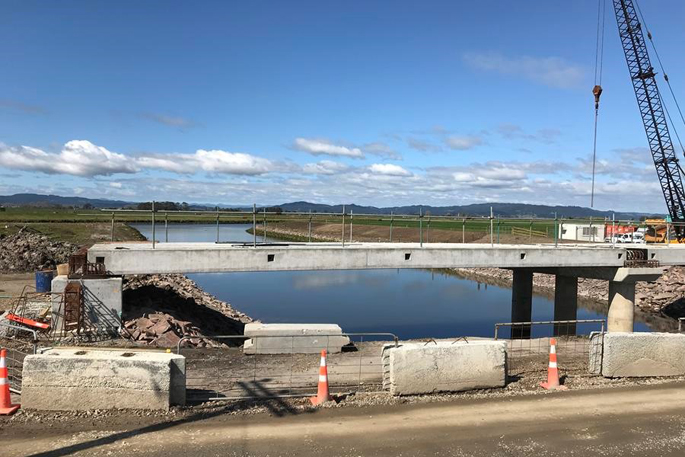 Stage five of the Rangitaiki Floodway Project has reached a significant milestone with bridge construction nearing completion on Thornton Hall Road near Whakatane.

The Rangitaiki Floodway Project is being built in stages to take pressure off the flood-prone Rangitaiki River. The current work, which started in late February this year, has seen the construction of a bifurcation channel and the upgrading of Thornton Hall Road, including the new bridge.

“Getting the bridge in place is a significant milestone. We have the bridge beams on, so now we can complete the abutments and bridge approach. We can expect the subbase layers of the road construction to get underway shortly and be completed by the end of October.

“At that point we can divert traffic across the bridge and remove the final piece of land and open the bifurcation channel,” says Jordan.

Activity around Thornton Hall Road has bound together several other improvements including upgrading the powerlines in conjunction with Horizon Energy and working with Whakatane District Council to widen the road.

At the same time, a wetland has been created in the area where Reid’s Central Canal will meet the Rangitaiki River. Regional Council’s Land Management team has overseen initial plantings, with more scheduled once the bifurcation is open.

“I’d like to thank the residents and motorists for their cooperation and patience while these critical works are undertaken. Please continue to be considerate and follow the direction of the temporary traffic management while driving past the site as it is important for the safety of our contractors.

“We are also looking to raise the section of stopbank alongside Thornton Road which is set out in our Long Term Plan, but we’ve decided to bring that forward while we are working in the area, so people will see that work taking place in coming weeks,” says Jordan.