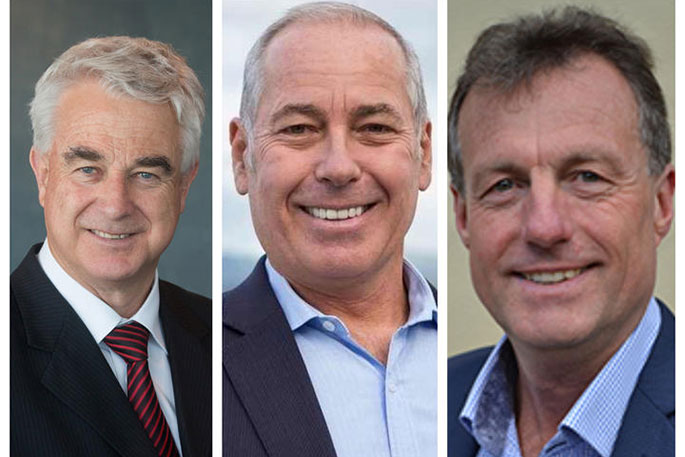 Ten candidates are chasing the top job, with three looking likely to be the ones to fight it out for the key to the mayoral office.

Businessman and former army officer, Tenby Powell grew up in Tauranga and earlier this year returned to live in the city to contest the mayoralty.

He is campaigning on issues around the need for a culture change in council, which he believes is divided on virtually everything.

"I think it is time to have some courage in council and for council to lead and make decisions and to make decisions on behalf of residents and for the future of the city."

He says the growth the city has been experiencing in recent years has far exceeded improvements to infrastructure, particularly roading.

"There is no doubt we have to fix our roads in Tauranga, we have got to create the ability for traffic to flow more freely.

"State Highway 2 is a classic example of a road that was budgeted for funding and that funding for various reasons was withdrawn. We have got to get back around the table with central government."

Mayor Greg Brownless says his first term as mayor has been difficult with a number of issues facing the council, including problems with residential developments, such as the Bella Vista project in the city and the management of council.

"It's been quite a rough first term but I believe I faced up to those problems and tried to sort them out."

He says now is the time to focus on the future.

"Not perfect yet, but I believe in the next term I can actually continue those changes and get a council that is responsive to the community and does things with the community rather than to them and that has been one of the things council has not been good at."

He agrees that transport and roading are two of the key issues facing Tauranga.

"We are getting more and more choked up with congestion and we know we have to switch to using some forms of public transport, but we also need to get the roads right at the same time."

He says the roads to and from the port, need to be freed up.

"It's the most important port in the country."

Kelvin Clout has been a councillor for six years, and deputy mayor for all of that time.

He is running for mayor for the third time, having been runner-up at the last two elections.

As well as infrastructure not keeping pace with development, Kelvin says a shortage of housing and housing affordability are key issues he is campaigning on.

"The first thing we do need to do is increase the supply of housing and there are many ways we can do that, so that will involve smaller houses, smaller sections and bringing the pricing to a more affordable range. The other thing we have done is support the charities that support the homeless."

The central business district of Tauranga has suffered with the expansion of the Bayfair Shopping Centre in Mount Maunganui and The Crossing at Tauriko.

Greg is convinced than when the Farmers Trading Company development, which includes shops, parking, accommodation and apartments, is finished in about a year and a half, it will bring change to the CBD.

Tenby says the inner city is in crisis.

"The reality of any downtown is it should be the heart and soul of the city."

He backs the idea of apartments on top of retail to bring vibrancy back into the central city.

Kelvin says within five years the CBD will be humming.

He does not think new blood is needed to lead council and believes his time as a councillor has been invaluable to now step up to become mayor.

"Local government is an incredibly complex beast and so it takes a while to navigate that to get some good outcomes and so I feel more than ready and capable of stepping up into the top job."

Greg says he's the person to lead Tauranga for the next three years.

"I have probably been mayor during the toughest three years that Tauranga has ever experienced and I have faced up to the issues and we have ordered inquiries into all those things and we have made most of the results public and we are determined to change and turn around the culture of council."

Tenby says he has a really clear vision for the city.

"This isn't just all about business and economics and a city is much different than a business. It's not a business, it's much bigger and more complicated than a business, but I have yet to see a city that is thriving and vibrant whose economics are in the state Tauranga's are in."

I hope these men are aware that Sunlives poll has 72% of people not wanting more money to be spent on yet another Wharf Street ’do up’. Will they listen? They promise to. Every election. Mr Clout for instance is touting for a museum, multipurpose stadium, arts and performance venue, world-class aquatics and fun park!!! Heaven help us - he thinks money grows on trees!

There is no quick fix that will solve all of Tauranga’s problems overnight, or even over a year or two. The CBD can be revived (and I hope it will), but much more important is proper, transparent, decision making by Council, with real responsibility and accountability for "other people’s money". Debacles like Bella Vista should not happen if proper checks and balances are in place; TCC should be monitoring their own performance and seeking to improve it. Personally, I think it is time for some new blood, because I see no signs of change in the old blood... We can’t be much worse off and a new broom may create a different culture that could be helpful.

Seems to me that more roads and more houses (on smaller sections) will not solve Tauranga’s housing crisis or our worsening traffic congestion. In fact it’ll do the opposite. Tauranga truly needs real political leadership to deliver a transformed city, based around high quality town centres with apartments and terrace housing, supported by high class, regular public transport, cycling and walking. Whichever mayoral candidate supports this kind of change and is willing to make it happen will get my vote.

The has-beens keep throwing their hats in the ring? Time for new blood! Young people that have huge mortgages and have learned what a budget is, knowing the consequences of not keeping to that budget. Candidates that are from ’Old Money’ should not be in charge of the treasury as they have no clue what a budget is.

Do your homework people

I realise many people are disappointed in the city at present. Think carefully before believing someone new will change all that. My question is is it a desire to help a city or Political Aspirations? Often it is the "devil you know" who is the better option.