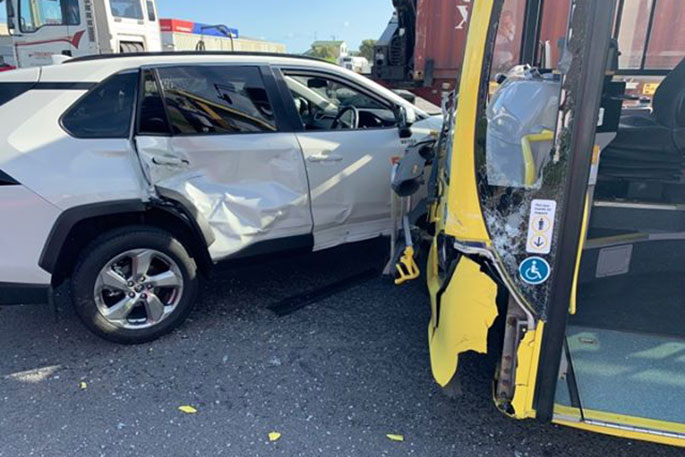 One lane of the road is blocked. Photos: Mike Cork.

One lane of Hewletts Road is blocked after a bus and car crashed this morning.

Photos sent to SunLive show a bus and a white SUV have collided in the bus lane, near the Z Service Station.

"Car was pulling out of service station and bus was “flying” down bus lane, and collected white car,," says a witness at the scene.

"Everyone is ok, no injury." 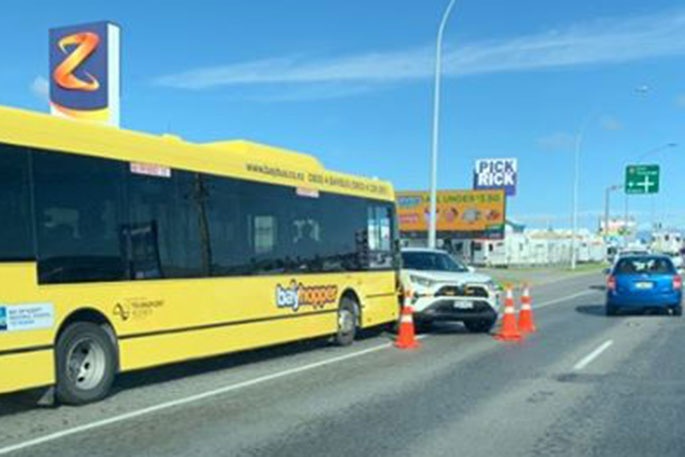 A police spokesperson says they were called to he crash at 8.40am.

"One lane was blocked as of 9am, there were no injuries reported."

REGULARLY, I can tell you that the speed of the buses using the so called bus lanes is generally WELL IN EXCESS of what any driver SAFE!!! (And I suspect in excess of the speed limits on that road!!))

Some people really exaggerate. As an ex city bus driver I can tell you... .no one flies down Hewletts Rd, but plenty of people think they can take on a bus and not just on Hewletts Rd. I’ve had many people pull out in front of me... and it’s like "hello... how big and how yellow do I have to be for you to see me?" Had one woman who even had a baby in a carseat in the back when she started a U turn right in front of me. Bigger vehicles always look like they are going faster than they are... so cut it with the judgements until you know from experience.

I have yet to see one of these buses speeding down Hewletts Rd. Obviously the SUV driver needs to pay more attention to what is happening around them

How on earth does one miss a Big Yellow Bus as one pulls out into traffic???? Oh wait.... they didn’t miss it! Thank God there wasn’t a Motorcycle in the lane! Wake up people, I see this all too often!

Although the SUV appears to be clearly in the wrong I gotta say the speed most of the buses hurtle down these bus lanes is irresponsible. I had a bus try to pass me on the left at the end of the bus and passing lane going North on Hewletts Road and he was fair moving even though I was clearly ahead of him. Driving that route he would’ve been aware that lane was ending there. Idiot. I can only assume that this SUV driver thought he had adequate time to make the manouvre. Hey bud drivers slow down. You have your own lane not your own race track. Why too does the St John Health Shuttle use the bus lanes . . .

Airport is half a mile away. Buses travel at 50km/h in the bus lane. Big bright yellow things. Easy to see coming.