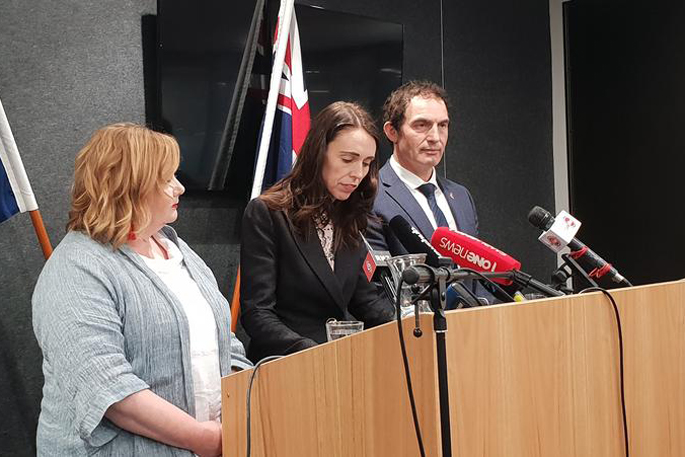 Megan Woods, Jacinda Ardern and Stuart Nash at an announcement of a new bill that will create a registry of guns. Photo: RNZ / Katie Todd.

The government is to bring in harsher penalties for those who illegally trade firearms in a bid to stop guns getting into the hands of criminals.

Today, Police Minister Stuart Nash confirmed details of a new bill that will create a registry of guns, and new offences and penalties for illegal manufacture, trafficking or changing markings on firearms.

Mr Nash said the Arms Act came into force 36 years ago in 1983 and was no longer fit for purpose.

He said a person who illegally sold a firearm was currently liable for a prison term of up to three months or a $1000 fine. Under the new bill they could be jailed for two years or fined up to $20,000.

At the bill's announcement in Christchurch this afternoon, Prime Minister Jacinda Ardern said she hoped the bill would get cross-party support.

"These changes are about public safety. They're a response, we believe, to what New Zealanders have asked for," she said.

"They're about ensuring people who need to use guns can, but those who shouldn't don't. And that we try and prevent guns moving into the black market and from being used illegally."

One proposed change was a system of warning flags to show if a person might not be fit to hold a firearms licence.

Behaviour that would raise flags included encouraging or promoting violence; hatred or extremism; serious mental ill-health issues including attempted suicide; having had various offences under the Wildlife Act or Wild Animal Control Act; being assessed as a risk to national security; having a temporary Protection Order; being involved in drug abuse; or being convicted of certain crimes.

"What we know is that the alleged [mosque] terrorist was stockpiling ammunition and guns - that would have raised a flag," Mr Nash said.

"What we're also doing is licensing and gun clubs, that may well have also raised the flag."

Under the new firearm licensing scheme, applicants would need to provide the name and address of their doctors, who would in turn be notified that person had obtained a firearms license.

If the person presented to the doctor with mental health issues, the doctor would be expected to pass that information on to the police.

But Mr Nash said that wouldn't mean automatic confiscation of their licence and wasn't intended to be punitive - instead, he said, it would enable the police to ask for more information to assess the level of risk to the individual and the public.

The government were expecting more feedback from medical practitioners during the select committee process, but Mr Nash said the government met with Rural Women New Zealand during consultation on the bill, and they were "fully supportive".

"They said one of their greatest fears is their menfolk taking the gun, going for the long drive to the back of the farm and never coming back. So this is about protecting their license owner themselves as well as the community," he said.

The Arms Legislation Bill will have its first reading on 24 September.

Looking thru these rules they just want to make it harder for the law abiding gun owner. Not going to make any difference to the criminals!